The Parole Board Queensland wants to be unshackled from the Queensland Corrective Services, which runs the state’s jails.

PBQ is pleading for its own website to demonstrate independence.

Michael Byrne QC, the President of the PBQ, is calling for action to back up its stated, legislated foundation: being a standalone body not beholden to jails and detention centres.

“The PBQ is an independent statutory authority. Its purpose is to make objective, evidence-based and transparent parole decisions, in accordance with the law, with community safety always the highest priority,” he writes in the 2018-19 annual report, released in September 2019.

“The Board’s independence is important for the same reasons recently articulated by the Chief Justice in respect of judicial independence[1].

“Fairness and rigour demand the Board be able to decide parole matters in accordance with relevant legislation, common law and guidelines without influence or pressure from external sources.

“Despite its independence from Queensland Corrective Services (QCS), the Board remains tethered to the department for corporate and strategic support, media and communications support, human resource management, and reporting and policy functions.

“The Board will continue to advocate for true independence,” he said.

“Importantly, the Board seeks to 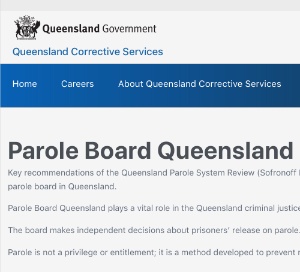 establish an independent website. A website would be an important symbol of the Board’s independence from QCS, and would allow engagement with the community and publication of information that might assist to cure some of the misperceptions about the work of the Board.”

During 2018–2019, the Board considered 17,413 matters impacting citizen liberty, based on evidence-based risk assessment.

“The work of the Board has become increasingly voluminous and complex. In one fortnight this year, Board members were required to consider 32,000 pages of material for 449 parole matters over 12 meetings.

“Significant complexity has been introduced by the No Body, No Parole legislation, and more recently, the Links to Terrorism legislation.

“The Board’s commitment to fair, evidence-based decision-making and community safety is genuine and resource-intensive. Each case is considered on its own merits on the basis of all evidence before the Board.

“Where the evidence is perceived to be insufficient to make a sound decision, the Board will seek what it needs,” he says.

The Board meets nine times a week (and, on top of that, there are out-of-session meetings for urgent consideration of some matters). Each meeting is chaired by the President or one of two Deputy Presidents.

“This year the Board appointed 12 new Community Board Members, bringing the total to 34 dedicated Queenslanders regularly contributing their time, experience and wisdom,” Byrne said. (These part-time members are in addition to the 14 full-time positions)