It’s often forgotten, because the price is paid slowly over many years, that bad police cost taxpayers a lot of money, as Chicago has learned over more than 20 years. 21 April 2015

Police breaking the law is costly

As police forces throughout the USA come under increased scrutiny for shooting people, the real-life cost of police breaking the law is becoming very apparent to the citizens of Chicago.

It is unusual for police misbehaviour to be measured so accurately in financial terms anywhere.

Measuring what corrupt or abusive police cost is particularly difficult in Australia, where compensation payouts are frequently shrouded by secrecy clauses, police are encouraged to resign before being formally charged with offences instead of being dismissed, and the cases of police excess tend to be – mostly – less dramatic than shooting people.

Over the past 20 years, Chicago has paid about $109 million compensation to abuse and torture victims of an out-of-control police commander, and his “midnight crew”, The commander was sacked in 1993. The police-committed offences occurred in the 1970s and ‘80s.

Chicago is still paying for what its politicians lauded at the time as a ‘crackdown on law and order’. 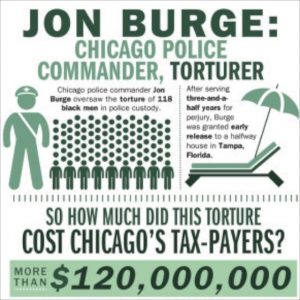 In April 2015, Chicago City Council added a further $7 million to the taxpayers’s bill over the behaviour of former police chief Jon Burge. The latest outlay by the people of Chicago will also pay for a memorial and an apology, as well as reparations.

These historical payouts come on top of an ‘instant’ decision in April 2015 by Chicago City Council to pay a further $7m compensation to the family of Laquan McDonald, a 17-year-old shot 16 times by a policemen in October 2014 when, police allege, the youth was carrying a 7.5cm knife. The council decided on the payout even before a compensation case was lodged by the family. The police officer involved is now the subject of a criminal investigation

Effectively. Chicago taxpayers have paid about $6m a year for two decades because the local governing officials lost control of their police force. It is not unusual for newby police ministers to be gulled by wily veterans, dressed in uniform, of bureaucratic infighting.

Chicago’s police commander Burge was eventually sent to jail for perjury and obstruction of justice, because a statute of time limitations meant he couldn’t be arraigned on the torture and abuse allegations.

But the city is still trying to sort through reviews of the cases of about 20 people remaining in jail, dating from the 1990s, who were probably convicted on false evidence secured after they were shocked with cattle prods, beaten with phone books and suffocated with plastic bags to compel confessions.

The planned reparations – for which Chicago citizens will go on paying – include free tuition at city colleges; psychological counselling and job training for those abused, as well as their families; financial reparations for those with credible claims of torture; and education about what happened in the Burge cases for Chicago public school students.

If anyone thinks a police culture changes when obvious excesses are brought into the open, there is currently a Chicago police officer on trial for involuntary manslaughter, among other charges, after the death of a woman near a park in March 2012. The officer, Detective Dante Servin, who was off duty, shot recklessly into a group of people in a darkened alley, killing Rekia Boyd, prosecutors say. But lawyers for Detective Servin have said he believed he saw someone in the group pulling out an item that looked like a weapon. Outsiders would have thought that Chicago police might have learned from this 2012 case, but the latest $7m compensation for a shooting just six months ago indicates that the local police may not yet have learned to think first, and shoot second.

By the way, disgraced and jailed former police commander Burge has just been released from jail after serving his sentence of four years: he is now drawing a monthly pension from the taxpayers of about $5000 for his past ‘service’ to the people of Chicago.