One of the most dangerous industrial place in NSW to work – where you don’t think of workplace deaths occuring – is in the police/prison industry, particularly in places of detention and operations involving police

If deaths in custody and police operations were included in safe work comparison figures, they would easily overwhelm other usual workplace death concerns.

But they aren’t even counted.

The state apparently turns a blind eye a risky industry which is operated by the state. In doing so, it may be selling short the concerns of the public as well as the health and safety –including post-traumatic stress disorder – concerns of its police and prisons workers.

In 2018, in custody (prisons/police custody) as well as during police operations, a total of 48 deaths (7 Aboriginal, 41 non-Aboriginal) were recorded. But there is little confidence the recordings covered all incidents, as no one has systemically analysed what is happening to create such figures in just one ‘industry’. 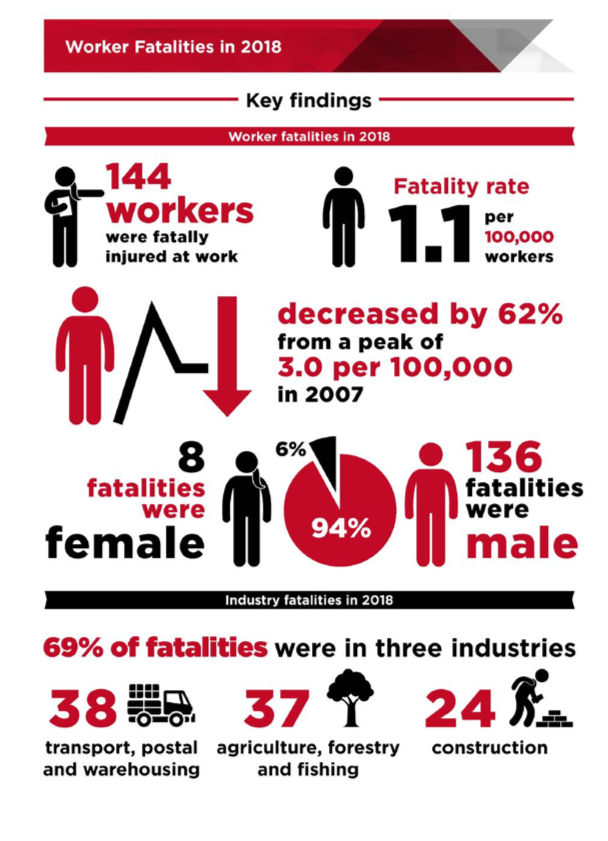 The chart shows the NSW figures for worker fatalities. Note the total absence of the police/prison industry.

Many police/prison Industry deaths may result from natural causes and/or suicides. And coroners’ inquests relating to the 2018 deaths probably won’t finish until the end of 2020, or later, so an accurate counting of the figures for that year is not yet known.

But investigative reporter Terry Flanders, a former NSW Police officer, says he is worried that the police/prison deaths go unreported to the work safety regulator. “Even if you consider only the trauma of such deaths on prison officers and police, they must generate workplace health and safety concerns,” Flanders says.

“But what is disturbing (in addition to the large number of fatalities) is that correctional facilities and police operations are ‘workplaces’ and any fatality in any workplace must be reported to SafeWork NSW.

“That doesn’t appear to be happening.

“I suspect that the police/prison industry fatalities are not being reported, which itself is a crime under NSW workplace health and safety (WHS) legislation.

Systems may cause some deaths

“I’ve been reading the coroners’ reports and there is an argument that in some cases, failures in correctional and police safe systems of work resulted in the fatality.

“If that’s correct, and the matters are not being reported to the WHS regulator who oversees WHS criminal misconduct, then corrections and police are avoiding possibly criminal sanctions.

“The checks and balances designed to oversee a safe system of work that resulted in the fatalities are not being activated.

“While coroners make recommendations, there doesn’t seem to be any reporting back to inform the coroner, WHS or other authorities that the recommendations have been implemented”.

“It appears no one is monitoring the system,” Flanders said.

“Also, given the recent revelation of ‘secret’ prisoners in Australian jails, held at the behest of the federal government, how would we know that all jail deaths have been recorded properly.

“And CLA is concerned whether the deaths of refugee detainees held in transit between Nauru, Manus and Australian health facilities are being recorded. And is anyone counting the deaths of federal detainees in federal refugee ‘jails’ in NSW, like Holsworthy?

“The raw figures are possibly very raw, and need much closer examination. Not to mention the trauma effects on police and prison officers, which appears to be totally overlooked.”

Dr Klugman said Flanders and CLA would be chasing down the facts on this worrying situation in NSW. That may lead to questioning interstate practices to see if the same problem pervades all Australia.

While Flanders and CLA appreciate that the dead people were not always “workers”, it is common for WHS regulators to record the deaths of ‘others’ (such as bystanders) in the workplace in other industries, for example when a truck reversing from a worksite kills a pedestrian outside the worksite.