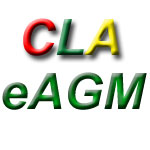 Members wishing to propose a motion can do so by entering their draft motion and a supporting statement on the following form. Proposed draft motions must be received by the Secretary by 5pm 17 February 2018. Proposals will be considered by the CLA Board at its Board meeting 18 February 2018 as to whether they are suitable to be included in the eAGM ’18, and if so the precise wording.

Those draft motions that meet the requirements for consideration at the eAGM will be available for on-line debate/comment from 19 February to 4 March 2018.