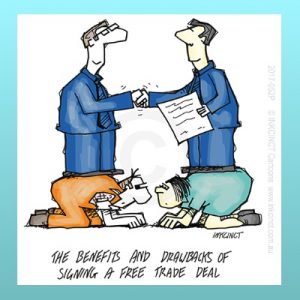 Comments by CLA on the Comprehensive Progressive Agreement on TPP* (CPATPP)

Civil Liberties Australia has grave concerns about the 2018 plan to sign and implement the new version of the former TPP*.

Firstly, countries have negotiated this enormous and new text in secret.  There has been no opportunity for public scrutiny.

There was widespread dissatisfaction with the earlier version. The proof of how much dissatisfaction is that, after 10 years of negotiating, proponents have not brought the deal to fruition.

Individuals and groups who raised a great many issues in the past can have no confidence that the 2018 replacement text will resolve any of the problems identified earlier. A lemon remains a lemon even when withering with age.

The public health effects of longer patents for imported pharmaceuticals and especially biologics.  These would tragically affect people on low incomes and potentially cost a fortune to the Pharmaceutical Benefits Scheme.

Restrictions on internet use and higher prices for downloads, increasing costs to consumers.

The potential lowering of safety standards:

Allowing free entry of overseas workers without the need for labour market testing.

Encouraging the outsourcing of even more government services, despite the recent revelations about widespread fraud, rorting and ripping off the most vulnerable people in our society by privatised services.

Copyright provisions that boost the rights of big corporates at the expense of the general public.

New legislation must be passed to implement changes to social legislation in Australia, but the CPATPP process will by-pass the usual levels of public discussion and scrutiny.

It is self-evidently undesirable for trade agreements to impinge on domestic social policy developed over many years by national consensus.

It is also questionable whether an existing parliament should presume to bind future parliaments which may have a mandate to alter this new legislation. They will not be able to do so without withdrawing from the trade agreement. Reversal of individual clauses would be costly, difficult and, to all practical intents, impossible.

The Investor State Dispute Settlement (ISDS) process allows international corporations to challenge Australian law in offshore tribunals.  These “courts” are run by corporate lawyers: they lack appropriate safeguards, such as being bound by precedent or allowing governments a right of appeal against their judgements.

Through this mechanism, corporations could sue Australia for introducing – or even maintaining – policies or laws which may threaten private company profits.  Corporations have already sued governments around the world, including the Australian government, over issues such as trying to monitor or reduce pollution from mining operations, restricting dangerous materials or even increasing wages.

The ISDS mechanism makes a mockery of democracy. Elected governments and the highest national courts can be overruled by an ad hoc three-person tribunal of non-judges in the interest of corporate profits. The concept of national sovereignty flies out the window.

The formal process to include ISDS (which even former Prime Minister John Howard rejected in the Australia-US Free Trade Agreement) is not subject to legislation. The government in power can introduce ISDS, simply by ratifying the CPATPP agreement.

For more detailed information, please refer to submissions on these matters provided to previous parliamentary inquiries into trade treaties.      ENDS

* Trans Pacific Partnership: originally between 12 nations. In January 2017, President Donald Trump pulled the USA out of the potential agreement, scuttling it, because he said it was a “bad deal”. The current CPATPP is between Australia, Brunei, Canada, Chile, Japan, Malaysia, Mexico, New Zealand, Peru, Singapore and Vietnam. Negotiations began in 2008.