A Congressional task force has spent over a year exploring options for creating a better and cheaper US prison-justice system…and there’s some lessons for Australia too.

An American task force, ordered into action by a US Congress alarmed about prison costs and systemic failures, is recommending big changes to sentencing, jail conditions, anti-recidivist programs and inmate motivation schemes.

The Charles Colson Task Force* on Federal Corrections aims to reform the US federal justice system, enhance public safety, and save the Obama government billions of dollars. Their January 2016 report, Transforming Prisons, Restoring Lives, summarises the findings of a year-long investigation into overcrowded and costly federal prisons.

“We have laid out ambitious, consensus-based recommendations that place public safety first while reserving prison for those who truly need it,” said task force chair, former Republican congressman from Oklahoma J.C. Watts, Jr. “These reforms are projected to reduce the federal prison population by 60,000 people in coming years and save more than $5 billion.” ($7bn Australian) 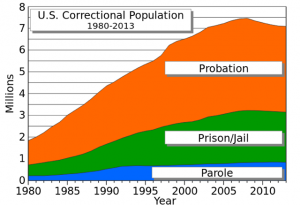 The US Congress established the bipartisan panel in 2014 in response to mounting concerns about the scale and cost of the federal Bureau of Prisons (BOP), which houses 197,000 people on a budget of almost $7.5 billion ($10.5bn Aust) this year.

Since the 1980s, there has been a seven-fold increase in the BOP’s population.

Alan Mollohan, the task force’s vice-chair, said that that growth was unsustainable. “The BOP has been operating at crisis levels for decades,” he said. “Its policies and practices have not kept up with best practice, presenting a missed opportunity to rehabilitate those who are confined in federal prisons and thus promote public safety.”

More than 100 experts and stakeholders provided advice to the task force, through public testimony, roundtables, discussions with experts, and conversations with those confined in federal prison.

The task force recommends that the federal justice system move away from its current “one size fits all” approach to meting out punishment and delivering treatment and programs. Instead, they propose basing sentencing decisions and correctional responses on the individual case, an approach grounded in research evidence as the most effective means of reducing recidivism.

Observing that prison is expensive and imposes tremendous harm to individuals, families, and communities, the task force recommends that prison sanctions be used sparingly and long terms of incarceration be reserved for only the most serious federal crimes.

They advise incentivising participation in programs proven to lower recidivism and increase the odds of success for individuals reentering society. They propose a more diversified, evidence-based approach to criminal justice that delivers public safety at less cost, building on the example of successful reforms in states like Texas, Utah, Georgia, South Carolina, and Pennsylvania

In more specific terms, the Task Force recommends that:

Mandatory minimum penalties for drug offences should be reserved for “drug kingpins”–those found to have served a leadership role in a large cartel;Program and treatment participation in prison should be incentivised through earned time off sentences; and The BOP should better assess the risks, needs, and assets of its population and align programming and treatment accordingly to reduce recidivism and enhance public safety.

Overall, the task force envisions the US federal criminal justice system as an integrated network, with agencies and decision makers working together more effectively to further the interests of justice and public safety. In this vision:prosecutors would be more selective in the cases they pursue,judges would be equipped with a broader set of sentencing options,the BOP would have better tools to incentivise those incarcerated and improve their outcomes, and re-entry would occur seamlessly from BOP to community supervision agencies.

If implemented as a package, the reforms are expected to achieve savings of over $Aust7bn, allowing for reinvestment in programs proven to reduce crime and freeing up the funds the US Justice Department needs for other priorities, like national security, state and local law enforcement, and victim assistance. Just as important, the reforms will make communities safer by ensuring the right people are sent to prison and that they return to society with the skills, supervision, and support they need to stay crime-free.

The Colson Task Force delivered its final report to Congress, the Attorney General, and the President on 26 January 2016. http://tinyurl.com/hmx5sdx

* The Task Force was named after Chuck Colson, who served time in federal prison for his role in the Watergate scandal. On release, Colson became a vigorous advocate for prison reform and founded the world’s largest prison ministry.