A short history of the sinister City of London Corporation

This is the first of three pieces under the general rubric: England: The Unlucky Country. The other two are short histories of sinister English politics and law. Since we use English law, Australia is also an unlucky country. We inherit our ‘hands off’, untouchables approach to bankers, lawyers, etc – Citymen – from “Mother England”.

England is effectively two countries: England proper and the almost unknown City of London Corporation, referred to here as The City.

The City’s “elsewhere’ status … stems from a simple formula: over centuries, sovereigns and governments have sought City loans, and in exchange the City has extracted privileges and freedoms from rules and laws”. 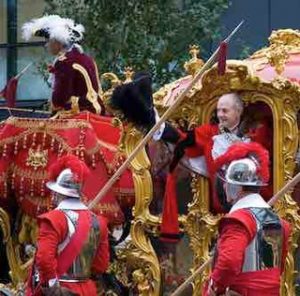 ABOVE: Sir John Boothman Studdard, an accountant, was Lord Mayor of the City of London (and Admiral of the Port of London) in 2006-7. Here he waves from the City’s coach.

Lord Glasman, an academic, wrote in The Financial Times (29 September 2014) that the Romans were “the City’s founders”. England was part of the Roman Empire from 43 AD until the empire collapsed on 4 September 476. In the Dark Ages (c. 500-c. 1500), England and West Europe succumbed to superstition.

The City’s “modern period” dates from 1066, when William the Conqueror “came friendly” and let the City keep its ancient rights. Lord Glasman said The City described itself in 1191 as a “commune” which “taxed itself, judged itself and governed itself”.

Magna Carta (June 1215) says: “ … the city of London shall have/enjoy its ancient liberties by land as well as by water..”

The City is said to have financed Henry V’s trip to France in 1415 which resulted in his surprise win at Agincourt.

During the reign of Queen Elizabeth I (1558-1603), The City began to use a lobbyist/enforcer, the Remembrancer. I like to think Her Majesty asked him: “Are you the muscle?”

The City was not above treason and murder. Lord Glasman said Stuart kings (1603-88) sought to impose their authority on the City, and that “one [attempt] led to the execution of the king”. The executioner separated Charles I’s head from his body on 30 January 1649.

Lord Glasman said King (1660-85) Charles II also tried to make The City subordinate to the monarchy. For some reason, the City did not get Charles but fixed his brother, James II: he was forced to abdicate in 1688. A Dutchman, Willem of Orange, was imported. He and his wife, May, James’s daughter, became joint monarchs as William (III) and Mary. He was known in Scotland and Ireland as King Billy.

The payoff for The City people came in 1690; they got a new Charter which proclaimed noisily and at length:

The City seems to have helped to make London what it is. Shaxson said in April 2016:

“London is the epicentre of so much of the sleaze that happens in the world. Usually there will be links to the City of London [Corporation], to UK law firms, to UK accountancy firms, and to UK banks.”

Shaxson noted that The City has “a private fund built up over the last eight centuries, which, among many other things, helps buy off dissent. Only part of it is visible: the Freedom of Information Act applies solely to [The City’s] mundane functions as a local authority or police authority. Its assets are beyond proper democratic scrutiny.”

Shaxson: “She meets a red cord raised by City police at Temple Bar, and then engages in a col­ourful ceremony involving the lord mayor, his sword, assorted aldermen and sheriffs, and a character called the Remembrancer …”

Shaxson said the Remembrancer is “the City’s official lobbyist in Parliament, sitting opposite the Speaker, and is ‘charged with maintaining and enhancing the City’s status and ensuring that its established rights are safeguarded’.” The Remembrancer’s office “watches out for political dissent against the City and lobbies on financial matters”.

After 2000 years, the secret and sinister City tells us much about England…and not a little about Australia.

Evan Whitton studied History at the University of Queensland, and won the Walkley Award for Journalism five times. The text of his eighth non-fiction book, Our Corrupt Legal System, can be seen at a section of a site run by legal academic Dr. Bob Moles: netk.net.au/Whitton/OCLS.pdf

BACKGROUND: The City is known as the ‘Square Mile’. It is 1.12 sq mi (2.90 km2). Throughout the 19th century, the City was the world’s primary business centre. London came top in the Worldwide Centres of Commerce Index, published in 2008. The City has a resident population of about 7000 (2011) but more than 300,000 people commute to work there, mainly in the financial services sector. The legal profession forms a major component of the northern and western sides of the City, especially in the Temple and Chancery Lane areas where the Inns of Court are located, of which two—Inner Temple and Middle Temple—fall within the City of London boundary.