Barristers spend years learning at uni and on the job to be excellent barristers, then they are made judges, for which they have received no training. Funny system.

Corruption is white collar (non-violent) crime. If systematic, which it usually is, it is organised crime. 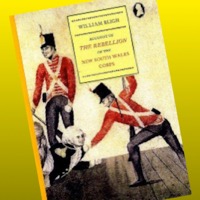 Justice. A former Sydney judge, Russell Fox, researched two legal systems for 11 years. He said the public knows that “justice marches with the truth”, that is, justice means fairness, and fairness and morality require a search for the truth, otherwise the wrong side might win.

Corruption has been endemic in Sydney since the NSW Corps got control of the colony in 1792 (photo), but taxpayer-funded judges and courts have rarely troubled the corrupt. Among the reasons:

Judges in France are trained, but the French know that justice is too important to be left entirely to judges; they use the common sense of ordinary people to save judges from falling into error. Lay judges (jurors) sit on the bench at trials and appeals and can outvote the judges. Lay judges would clearly help our judges (and taxpayers). A few examples:

Lord Reid, who sat on the equivalent of our High Court for 27 years, said at least 90% of decisions could have gone either way, i.e. nearly half were wrong. An appeal court is thus a casino; lawyers can tell clients they might as well have another roll of the dice.

Absolutely does not mean absolutely

ICAC should not do its job

Judges and the courts having failed to do their job on corruption, the NSW Parliament initiated an Independent Commission Against Corruption in 1988. ICAC was instructed it to use a French-type inquisitorial procedure to identify and name the corrupt, but in Balogh v ICAC (1990), five High Court judges said ICAC should not name the guilty men.

Tony Mason CJ, Bill Deane, Daryl Dawson, John Toohey, and Mary Gaudron said: “… the Commission is invested with considerable coercive powers which may be exercised in disregard of basic protections otherwise afforded by the common law.” The “basic protections” are the 24 anti-truth devices which protect the corrupt and other organised criminals, and inflict the malady on judges. Parliament had to bring down legislation to enable ICAC to make corrupt findings.

Could does not mean could

The ICAC Act’s Section 8 (2) defines corrupt conduct as “ … any conduct that adversely affects, or that could adversely affect … the exercise of official functions by any public official.”

We can construct a dialogue between a judge and a lay judge:

Lay judge: “Not really, judge. It’s back to front and a bit redundant, that’s all.”

“The key word is ‘could’. If the conduct COULD adversely affect how an official acted, that’s the end of it; the conduct is corrupt.”

“But what if the conduct did not adversely affect the official’s action?”

“It makes no difference. Bob Trimbole did a lot of bribing. Suppose he offered a judge a bribe but the beak knocked him back. The authorities could obviously investigate Trimbole’s conduct.

Nonetheless, in a case in which the conduct of three suspects did not adversely affect an official’s actions, High Court judges voted 4-1 that ICAC could not investigate the suspect’s actions. (ICAC v Cunneen, April 15, 2015) The vote of the four judges – Robert French CJ, Ken Hayne, Susan Kiefel, Geoffrey Nettle; Stephen Gageler dissenting – cast doubt on at least 50 ICAC findings.

ICAC said on April 19 that the ruling would kill off current investigations; raise questions about convictions; and could “involve the state of NSW and the commission in costly and protracted litigation involving persons who have been the subject of corrupt conduct findings”.

The NSW Parliament had to pass retrospective legislation to validate ICAC findings.

Evan Whitton is a legal historian, after being an award-winning journalist for many years. China Fangzheng Press has contracted to translate and republish his book on the two systems.