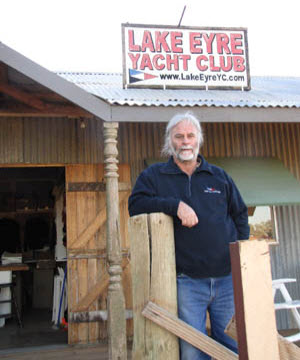 Resolving the latest native title claim has delighted the Arabana people…but the decision may have taken the wind out of the sails of Australia’s strangest yacht club, and its Commodore, Bob Backway (pictured at Lake Eyre). Will the dispute end up using maritime law to resolve an issue bang in the middle of the driest continent?

The Arabana people are rejoicing after their native title rights to the Lake Eyre area in central Australia were acknowledged recently by the Federal Court…but members of one local club fear the decision could lead to their traditional, common law rights being drained from under them.

Lake Eyre Yacht Club members try to sail on the lake on the rare occasions when it fills (once every few years on average…but every year recently).

One arm of the SA Government, the national park bureaucrats, are trying to ban the yachties, while other state authorities – maritime and transport – provide formal boating rules under the SA Harbors and Navigation Regulations 2009…which include coverage of Lake Eyre!

Club commodore Bob Backway, who is a retired technical officer with homes in both ‘nearby’ (about 100km away) Maree and Melbourne, claims the trailer-sailer and small catamaran yachties have a common law right to sail on the transient Lake Eyre, which is 15m below sea level.

Despite his claim, SA’s Environment Department last year hit him with a $345 fine for sailing without a permit, but he has refused to pay. The matter of prosecution is still up in the air.

“I told them I was prepared to go to jail over it,” Bob said. “Lake Eyre is a national park: national parks, and the waterways in them, are for all Australians to enjoy equally. We are a multicultural society, and no one culture can own the public estate.”

The Federal Court confirmed the Arabana native title over the Lake Eyre area – or Kati Thanda, as Arabana people call the lake – and surrounding desert country, a total of more than 70,000 sq km. In return, the Arabana agreed to give up their claim over the township of Marree, which has a population of 70. 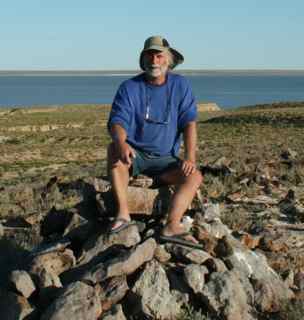 Aaron Stuart, chairman of the Arabana Aboriginal Corporation, has been quoted as saying Lake Eyre is “like Uluru” (Ayers Rock) to his people who believe that their ancestral spirit, Warrina, lives in the lake and is disturbed by boats.

Mr Backway says there are other Arabana people who are happy for yachties and others to enjoy the lake…whenever Aquarius deigns to pour down the waters.  Bob says the rights of all Australians also reside in the lake, and that it is no-one’s right to exclude yachties, swimmers, kids who wade in the shallows, or bird lovers – provided they’ve paid their Lake Eyre park permits.

Who would have thought that the High Court may eventually have to rule on maritime law as it applies to the dead centre of Australia!