It’s alarming how quickly supposedly intelligent bureaucrats would dispense with citizen’s civil liberties. Are they not aware that our Australian liberties ARE our lifestyle and our values?

By Tamara Tulich and Jessie Blackbourn* 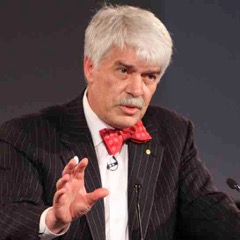 Preventing a Paris-style attack in Australia would, according to former attorney-general’s department secretary Roger Wilkins (photo), require an expansion in the use and scope of the control order powers. This would include an increase in the monitoring of controlees’ phones, computers, finances and movement.

But the dust has barely settled on a bill, now introduced to parliament, that seeks to amend the control order regime in two significant ways. It would lower the age at which a control order can be imposed to 14 and enable the use of secret material in control order proceedings.

These proposed measures would make significant inroads into some Australians’ civil liberties. Because of this, a parliamentary committee is conducting an inquiry into the bill. Meanwhile, the Independent National Security Legislation Monitor is reviewing whether the control order regime as a whole requires further safeguards.

We should await the outcome of these reviews before making further changes to control orders, particularly in the absence of any evidence to suggest that the current regime is not fit for purpose. To the contrary, Justice Minister Michael Keenan has said that control orders have proved effective as a form of “enhanced surveillance” to prevent terrorism.

Preventing terrorism has been a defining feature of anti-terror law-making, both at home and overseas, since the September 11 attacks of 2001. Australia has introduced “pre-crime” measures – such as control orders – that permit the state to intervene and restrain an individual on the basis of an anticipated harm, rather than past wrongdoing.

These measures deviate from the traditional retrospective orientation of the criminal justice system, where the state reacts and responds to harm by prosecuting and punishing criminal acts on the basis of evidence gathered about past events.

But, according to Wilkins:

“Preventative mechanisms are difficult for the traditional areas of criminal law to digest … because it’s normally ex post facto and here we need to act before to prevent or shut down what might be a terrible tragedy.”

Preventive measures are not new. Australia has long had laws that aim to prevent future harm by restricting an individual’s liberty in the present, from legislation targeting 19th-century bushrangers to contemporary drug and organised crime laws.

These measures have often departed from accepted legal principles and protections. In pursuit of security, the liberal state has:

“… long adopted means that sidestep, avoid or are indifferent to the operations and concerns of the criminal law.”

This goes some way to explaining the relative ease with which control orders have endured and been replicated in other areas of the law, despite garnering significant criticism for their deviation from criminal law principles and protections. The state has long relied upon similar practices in its pursuit of security.

However, this does not mean that preventive measures should be extended in the absence of evidence for their need or without safeguards. We should also question whether prevention really is the best policy. Wilkins stated that, in the wake of Paris:

“… the use of control orders needs to be much stronger. In a modern, liberal democracy that’s about the only thing you can do.”

Sixty-three people have been charged with terrorism-related offences in Australia since September 11, 2001. Twenty-five of these have occurred since September 2014. To date, this has resulted in 26 convictions.

Many convictions have been for preparatory offences, such as doing an act in preparation for, or planning of, a terrorist act. Preparatory offences involve the criminalisation of acts taken well before and further removed from harm than that which is traditionally accepted in Australian criminal law. These offences also attract the severest range of penalties available under the Criminal Code.

To date, the longest sentences have been imposed for the offence of conspiring to do an act in preparation for, or planning, a terrorist act. Mohamed Elomar and four other men were sentenced to between 23 and 28 years’ imprisonment, with non-parole periods ranging from 17 to 21 years.

The criminal law already allows police to intervene at a much earlier point for terrorism-related offences than for most other crime. It grants police widespread powers to intercept communications and detain terrorist suspects.

Since 2002, Australia has passed more than 60 anti-terrorism laws. But terrorism on home soil has thankfully been rare.

Reactive law-making does not typically make for good law, and parliament should resist the calls to use the terrorist attacks in Paris to make further changes to anti-terrorism laws.

Knee-jerk reactions to the terrorist attacks in Paris won’t make us any safer. Instead, they will risk further eroding the rights and liberties of all Australians.

This item was first published on The Conversation on 23 Nov 2015: https://theconversation.com/reactive-anti-terror-laws-risk-further-eroding-freedoms-without-making-us-safer-50959

For a mechanism to prevent knee-jerk law-making, see the ‘blue paper’ concept available by downloading the November issue of the CLArion, Civil Liberties Australia’s monthly newsletter, from: https://www.cla.asn.au/News/nov-2015-newsletter-cla-prepares-strategic-plan-seeking-better-justice/