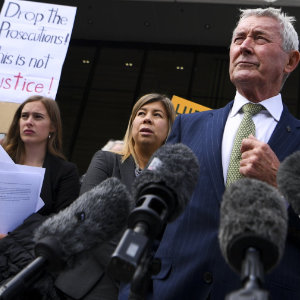 In late-August 2019 Ernst Willheim, a visiting fellow at the ANU College of Law, gave a presentation for some 100 people at the university on the Witness K – Bernard Collaery case. Until 1998, and for 30 years before that, Willheim worked in the Attorney-General’s department so he understands how government legal bureaucracies are supposed to work, and how they actually do work.

The Australian government has taken many opportunities to stress its support for an international rules-based order. Once was when the Chinese government refused to accept the decision by the Permanent Court of Arbitration (PCA) in its dispute with The Philippines on maritime boundaries. Australia urged China to abide by the decision reached from the internationally-agreed procedure for settling disputes between countries, but apparently Australia exempts itself from any such obligation.

But then, for example, faced with the prospect of submitting the question of maritime boundaries between Australia and Timor Leste for arbitration – as prescribed in the UN Convention on the Laws of the Sea (UNCLOS) – Australia unilaterally withdrew from the jurisdiction of UNCLOS.

The Timorese government had no option but to negotiate directly with Australia. As is now known publicly, Australia successfully gained advantage in the negotiations by ordering its foreign security agency to bug the offices of the Timorese government, under cover of ostensibly renovating the premises as part of a foreign aid program.

When the Timorese government learned of the covert operation, they wanted the agreement with Australia annulled by the international Court of Justice (ICJ) because Australia had gained an unfair treaty advantage fraudulently – by eavesdropping on the Timorese, Australian negotiators had real-time information on Timor’s negotiating position.

Witness K was to be a key witness for the Timorese government. He was the ASIS (1) officer who had the job of bugging the TL government offices. Witness K was concerned at the propriety of the bugging operation, especially when he heard that Alexander Downer and Ashton Calvert, respectively Foreign Minister and the departmental head of DFAT (2) at the time, were subsequently gainfully employed by Woodside, the beneficiaries of the outcome of the negotiations.

ASIS raided the Canberra home of Witness K and confiscated his passport, preventing him from leaving Australia to travel to the ICJ in The Netherlands to testify as Timor Leste’s principal witness. Then ASIO (3) raided the Canberra office of Collaery (photo, outside the ACT Magistrate’s Courts), Witness K’s government security-approved solicitor, who was also representing the Timorese government, and seized documents relating to the ICJ case.

So, one party to the dispute, the Australian government, prevented the witness for the other party from attending the international court hearing, and seized the documents relating to the case from the other party’s lawyer. Such action by one party against the opposing party in an Australian jurisdiction would, in the opinion of Willheim, constitute a contempt of court.

Witness K and Collaery claimed that the seizure was a breach of international law. The ICJ agreed that Australia should not interfere in dealings between the TL government and its legal adviser and ordered the Australian government to return the documents to Collaery without reading them. The documents were returned, but only after the Timorese agreed to drop the case against Australia at the ICJ.

It might be expected that the Australian government would have wanted the embarrassing revelation of its behaviour towards a poor but friendly neighbouring country forgotten as quickly as possible and moved on: instead it has moved against Witness K and Collaery.

Before a prosecution can be launched in a case such as this, the law requires that the Attorney-General of Australia must formally give permission to the Commonwealth Director of Public Prosecutions (CDPP) to proceed.

No published reason for prosecuting

The security services were unable – for years – to persuade then-Attorney-General George Brandis to authorise the prosecution, but his successor Christian Porter did so shortly after taking office. Porter has not tried to explain the principles underlying the decision to prosecute: when forced to respond to questioning he has only said that prosecution was the recommendation “independently” arrived at by the CDPP. As discussed below, the Attorney-General has not been probed by the Labor opposition as to why he authorised the prosecutions whereas his predecessor had not.

The behaviour of the prosecution in this case is as breathtaking as the government’s in the dealings with the Timorese government.

The government has tried to avoid scrutiny of the K/Collaery case by hearings in closed court, and even by trying to conceal the trial is taking place. When the first hearing was due in August 2018, the prosecution unprecedentedly prevailed on the ACT Magistrates Court to not list the hearing,

When Willheim phoned the court and asked about the hearing and the lack of its being listed, he was told that no information could be provided on the case. Willheim then wrote to the court pointing out that constitutional principles required that the hearing be publicly listed, and was then told the time and date of the hearing, which he attended.

Why did the government seek to keep the hearing from public view, even before there was any ruling on this matter by the court itself?

The brief of evidence against the defendants was finally served on Friday 21 December 2018 – that is, after most legal offices had closed for Xmas: the charges had been first laid seven months previously!

‘Court closed’…sign of the security times

A hearing took place on 28 February 2019. Again the hearing was not listed, and there was a sign saying “Closed court” – this in the absence of any suppression order by the court itself. The CDPP presented to the court a certificate requiring a criminal trial in which neither the defendants nor their legal counsel would be told the case against them.

As if the behaviour of the prosecution has not been vindictive enough, it has insisted on Collaery lodging bail – on a defendant who, because of the charge against him, cannot perform any work as a barrister in the ACT.

The court does not necessarily have to agree to a closed hearing. That will have to be decided by the court in a hearing…with that decision hearing itself probably held in a closed court.

What escaped discussion at the Willheim presentation was the Labor opposition’s covert support of the Coalition government in this affair. Not a single question has been asked by the ALP: by remaining silent they have avoided scrutiny. Only when I challenged Penny Wong at the South Australian ALP state convention in 2018 was she forced to state the ALP position, which is that this is a matter of national security and should proceed. At the subsequent, carefully staged-managed ALP national convention the issue was not raised.

So there is bipartisan support for the K/Collaery prosecution, which appears to be part of a pattern of protecting the security services from public scrutiny. The Parliamentary Joint Committee on Intelligence and Security (PJCIS), whose nominal responsibility is to conduct oversight of the security agencies, instead appears to see its purpose as shielding them.

I make this final comment on the question of the justification for prosecution. Although nobody has articulated the reasons for prosecution, the tiny number of commentators who have supported it have said that any person who signs up to work in a security service is bound by its secrecy provisions, so that prosecution is required to deter any officer from disclosing any information about his or her activity.

Such an approach means that what is right and what is wrong in any abstract sense does not exist: what is right is what the agency says it is, and no officer of the agency has any option but to comply. This is very reminiscent of the pleas of Nazi war criminals who said they were only obeying orders – a defence that the judges at Nuremberg rejected.

The security personnel are our employees, not our masters. Yet the protection given them by our elected representatives in Parliament calls that into question. The use by Andrew Wilkie MHR (5) of the term “pre-police state” to describe our country may turn out to be an understatement.

(4) The Permanent Court of Arbitration, established by treaty in 1899, is an intergovernmental organization which provides dispute-resolution services to the international community. Like the ICJ, it is based in The Hague, The Netherlands.

(5) Wilkie is the Independent Member of the House of Representatives for the seat of Denison Tasmania. He was a lieutenant-colonel in the Australian Army and, after that, served in senior positions in the security-coordinating Office of National Assessments, which in December 2018 transmogrified into the Office of National Intelligence. Wilkie’s book is called ‘Axis of deceit’: The Extraordinary Story of an Australian Whistleblower. Publisher: Black Inc., Melbourne 2010. Paperback ISBN: 9780977594962 RRP: $24.95

* Author Dr Richie Gun AO is a former Member of the House of Representatives (Kingston SA 1969-1975). In 1983 he chaired the Commonwealth’s Interim National Occupational Health and Safety Commission. In 2015 Gun was appointed an Officer of the Order of Australia “for distinguished service to medicine, particularly in the field of occupational health and safety, and to socially disadvantaged communities in regional Australia and Timor-Leste”. He has made 10 voluntary ‘tours’ of Timor Leste, working as a medico, and is a member of CLA.