A new book highlighting how wrongful convictions occur in Australia will help launch a campaign to bring ‘Better Justice’ to all courts of all states and territories, and federally.

First review of book: Miscarriages of Justice: Criminal Appeals and the Rule of Law in Australia by Bibi Sangha and Robert Moles (LexisNexis) 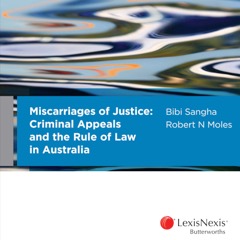 Legal academic Dr Bob Moles and his Flinders University Adelaide lecturer wife Bibi Sangha have just released a new book which will be an invaluable addition to the international literature on wrongful convictions.

The two have worked tirelessly on a number of miscarriage of justice cases, particularly those in South Australia. They fought long and hard over many years to bring the Henry Keogh case* to public attention and assist in bringing the matter back before the courts. They were also instrumental in achieving recent and critical criminal appeal reform in South Australia. Dr Bob Moles has also been outspoken on the Sue Neill-Fraser case* in Tasmania.

The promotional flyer for the book says it identifies a fundamental flaw in the Australian criminal justice system: the appeal system. The authors argue that the existing regime does not comply with the rule of law or Australia’s international human rights obligations. The book refers to the further right to appeal legislation in SA and moves to introduce a similar provision in Tasmania (where a Bill similiar to the new SA Act has recently been introduced to parliament). Importantly, these initiatives represent the first substantive change to the criminal appeal rights in Australia for 100 years.

The authors argue that a further right to appeal should be adopted nationally.

The book includes a foreword by the former High Court judge Michael Kirby. It has been reviewed by Malcolm McCusker AC CVO QC, the former Governor of WA and also as a barrister someone who has personally appeared in several high profile miscarriage of justice cases. McCusker states:

It is a book which should be read, not only by lawyers, prosecutors, police, judges and parliamentarians, but by all who abhor injustice – and isn’t that everyone in a civilised society?

I have ordered several copies (because one is going to be heavily marked and dog eared!). The publication will also provide a valuable analysis of the first further right to appeal cases in SA, Keogh and Drummond, which will be invaluable in determining the best way forward with the Sue Neill-Fraser case (particularly in relation to what constitutes “fresh and compelling” evidence).

Dr Bob Moles and Bibi Sangha have also authored a number of other books involving miscarriages of justice including the very useful text Forensic Investigations and Miscarriages of Justice: The Rhetoric Meets the Reality (Irwin Law Toronto 2010, with Professor Kent Roach of Canada). They have also published in a number of high profile peer-reviewed legal journals.

*  Keogh is currently free, acquitted after 19 in years in jail for murder. The SA DPP is trying to re-try him, but at least four forensic experts have already told the SA Supreme Court that  the death in question was most probably an accident. Neill-Fraser has served six years of a sentence for murdering her husband: no body, no weapon, no believable motive, and eyewitness and forensic ‘evidence’ in court of extremely dubious worth mean that this case also should be reviewed by the courts – CLA editor.

BARBARA ETTER APM is principal of BEtter Consulting and Adjunct Professor of the School of Law and Justice at Edith Cowan University, Perth WA. She is a former Assistant Commissioner of Police in WA and former CEO of the Integrity Commission in Tasmania, where she is now based. Barbara is a member of CLA and the pro bono lawyer for Sue Neill-Fraser.