After five years, Mulligan and his dog Willow won the right to fly, together, after the decision of a judge now under closer examination was overturned by an appeal court.

In a long-running battle that’s taken five years to resolve, Virgin Airlines Australia has been hit for six by a dog named Willow.

And in the process, a federal circuit court judge has been snapped at by his fellow judges in a legal dogfight most unlike an appeal court.

A bloke named David Mulligan, who has cerebral palsy, bad eyesight and poor hearing, eventually won his battle in September 2015 to be able to fly on Virgin with his assistance dog. He has also won $10,000 compensation and had all his legal bills paid.

It all started in mid-2010, when Mulligan simply tried to book a flight on Virgin. Four-and-a-half years later, Virgin’s rejection of that booking made it to the courts.

In the first court, the January 2015 case came before Judge Sandy Street (photo ABC TV), a judge on trainer wheels, appointed in January 2015, in the Federal Circuit Court of Australia (FCCA). 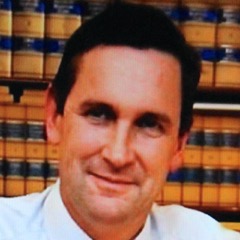 After hearing the evidence, Judge Street decided, quick as wink, in favour of Virgin Australia Airlines Pty Ltd. He ruled “ex tempore” (that is, immediately, in lawyer-speak, without taking some days or weeks to think about it). He said that, under his reading of the laws, rules and regulations, Virgin did not have to allow Willow in the cabin of their aircraft to be of assistance to Mulligan before, during and after the flight if needed. He also ordered Mulligan to pay Virgin’s legal costs.

But, as it turns out, Judge Street was not reading particularly well in his first month on the job.

Mulligan might be disabled, and have a dog whose name indicates she might be for bending, but the man himself is a fighter of the first order. He had already tried to win over Virgin through a process in the Australian Human Rights Commission but failed. Now, having seemingly been beaten in the FCCA, he decided to take the case to a full appeal in the next ‘level’ up in the court system, before three Federal Court of Australia (FCA). They were Justices Flick, Reeves and Griffiths (FRG).

These more learned brother judges in a case handed down on 7 Sept 2015 – Mulligan v Virgin Australia Airlines Pty Ltd [2015] FCAFC 130 – reversed the decision in the lower court, told Virgin it had discriminated against Mulligan, and ordered the company to pay him $10K cash compensation and to pay his legal bills all the way, since the first court case.

Effectively, they told Virgin to fly Mulligan and all the other Mulligans in similar situations, with their dogs.

Judges FRG, in the introduction to their decision, said the case might seem to be a minor matter of whether a man could take his helper dog on a flight, but it was much more than that.

“This appeal raises some important issues concerning the proper construction and application of various provisions in the Disability Discrimination Act 1992 (Cth) (DDA) and their interrelationship with various laws and instruments which affect civil aviation,” judges FRG said.

“A central issue is whether the respondent airline unlawfully discriminated against the appellant, who claimed to suffer from cerebral palsy which affected his vision and mobility, when the airline refused to allow his dog, Willow, to accompany him in the aircraft cabin.”

They summarised Judge Street’s reasons for his early, and off-the-cuff, decision…then they proceeded to blow his reasoning out of the water.

These (Judge Street’s) reasons for decision, it may be noted, were given in an ex tempore judgment.  It must necessarily be recognised that the attributes of different judges vary enormously and that appellate courts stand in a very different position to a trial court having a large volume of cases, such as the FCCA: M D Kirby, ‘Ex tempore Reasons’, (1992) 9 Australian Bar Review 93.  In a case such as the present, however, where the factual findings to be made and the legal conclusions to be reached were not easy of resolution, it was perhaps surprising that the primary judge decided to deliver ex tempore reasons rather than to first pause for reflection.  Any experienced judge may have hesitated – and, perhaps, avoided error.

Civil Liberties Australia is delighted that Mulligan has won, that disabled people are less likely to be discriminated against in transport services, and that Judge Street has been sharply shown the error of his early-judging career ways.

But cases like this leave a bad taste in our mouths, because they fail to address underlying issues, such as:

The justice system in Australia is light years away from being a robust mechanism delivering repeatedly high quality decisions that comprise a fair go for all Australians. Judges and lawyers and politicians (roughly 25-40% of whom are lawyers) in Australia should address these failings as a matter of urgency.

* There have been many judges with the surname Street in NSW legal history: it is a famous Australian legal name, and on the female side, a shining light for equal rights and justice for all, as well as elimination of all forms of discrimination.

NOTE: Since  Civil Liberties Australia wrote up this case, ABC TV has revealed an allegedly unusual pattern of decision-making in migration cases by Judge Street. The story is here: