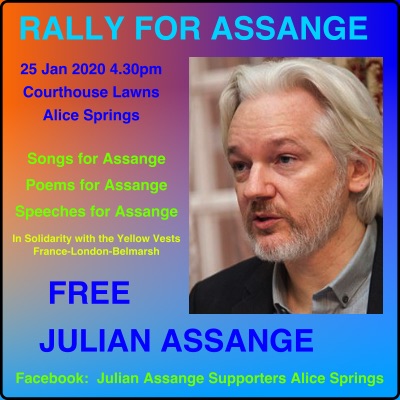 A rally will be held on the courthouse lawns in Alice Springs on Saturday 25 January from 4.30pm in support of the Yellow Vest Brigade.

The yellow vesters will travel from France to London to protest at Belmarsh Prison where Julian Assange is being held until his trial in February on extradition charges.

Similar rallies are being held nationally and internationally.

The centre of Australia rally has been organised by Alice Spring group JASAS which formed in November 2019. It meets regularly to co-ordinate and update information on the Assange situation and keep local supporters informed.

Julian Assange is being held in prison in the UK illegally to face charges and pending extradition to the USA. Irresponsible governments and authorities are ignoring the reality of this situation.

Widespread national and international support is growing for the release of Julian Assange, including doctors, teachers, journalists and ordinary people.

A further action is being planned for 24th February, the date set for the commencement of Assange’s trial in London.