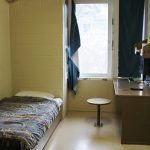 The inmates, 100 males, 17 females and some as young as 13, are locked in isolation in individual cells. (Children as young as 10 can be held in the jail).

Some 40% of the inmates (abut 55 of them) are Indigenous (Indigenous people comprise about 3% of the Australian population).

A child’s cell at the centre (Qld prisons photo).

The mental health of all locked-in-isolation children 24/7n will be deteriorating.

”We know with anybody in solitary confinement that their mental health will decompose within 48 hours…and we’re talking about children,” founder of Sisters Inside, Debbie Kilroy, said.

A 77-year-old female supervisor in the operations room at Brisbane Youth Detention Centre in Wacol tested positive after working five shifts at the centre.

Because of that, the Brisbane children’s jail is closed down.

Authorities have also stopped personal visits to Arthur Gorrie, Brisbane, Borallon, Brisbane Women’s, Southern Queensland and Wolston prisons. Thousands of prisoners are cut off from seeing their children and from family support.

The inmate to staff ratio at the youth jail indicates why locking up kids is so expensive.

To solve the current Brisbane youth jail contamination problem, Queensland prison authorities are planning to send Brisbane and south-east youths to Townsville to be locked up, adding significantly to costs.

It will also lock the children away 1000 kilometres from their parents and siblings.

What it is like for kids in jail: https://tinyurl.com/yx9bvn7v