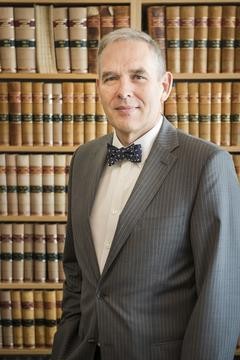 The big legal guns were robed and loaded with precedent for the Attorney-General in the Supreme Court of Queensland recently when the AG took on Russell Gordon Haig Mathews, a “man of very modest means” on a disability support pension.

In a Solomon-like judgement judge David Jackson (photo) managed to strike a blow for model litigant principles while still imposing a “fine” on a frustrated graphic artist.

Mathews was charged with contempt for displaying two signs at his house in Brisbane Road Booval in early 2019 that stated a Court of Appeal judge and the Court of Appeal were corrupt and that a magistrate was likely corrupt.

“This is an application for contempt of court. The contempt alleged is of the variety known as scandalising the court,” judge Jackson wrote in his judgement.

The judge explained that criminal contempt of court is a species of criminal offence, but it is unlike other offences in some ways. “It is prosecuted in a summary way under the rules of court, although it remains a criminal offence at common law in this jurisdiction.”

Mathews tried to claim his “publications” were protected by the constitution-implied, federal freedom of communications on governmental and political matters. But that didn’t wash for a moment…given there was no state legislative protection of a bill of rights in the state in 2019 (there is some protection now: Qld got a state bill of rights on 1 January 2020).

“Having regard to the unlikelihood that anyone who knows of the respondent’s reasons for displaying the signs would take his complaints and statements seriously, it must be thought unfortunate that a proceeding was necessary in this case.”

Judge Jackson said Mathews “suffers from an acquired brain injury from a head injury or head injuries suffered long ago. There is some medical evidence as to the extent or effects of his injury or injuries in that regard. There seems little reason to doubt that the respondent also suffered from one or more psychological disorders that may or may not be associated with his acquired brain injury.

“He was obviously delusional as to some of his beliefs as to the basis of the corruption he asserted against, inter alia, the courts and judicial officers. These points go in reduction of the responsibility that he might otherwise bear for his assertions. However, the respondent did not raise any question of mental health by way of defence so it is not appropriate to take them further.”

Which is a shame, because judge Jackson considered whether mens rea was needed for a crime to have occurred in this difficult area of the law. Perhaps he could have discounted the eventual “fine” by 50 or 80% if he’d ruled on the extent of Mathews’ mental disability.

“The respondent is accepted by the applicant to be a man of very modest means in receipt of a disability support pension. Even a fine of a few thousand dollars might be beyond his capacity to pay or create a very heavy burden having regard to his personal financial circumstances. (H)is contempts, although prima facie serious, are less so when seen in the light of the facts…

“The applicant (the QLD AG) appeared in this hearing and possibly in earlier interlocutory proceedings by senior counsel. I do not consider the complexity of the case was sufficient to allow in the fixed amount any amount for the costs of senior counsel.

“In the result, I will order that the respondent pay the applicant’s costs of the proceeding, fixed in the sum of $5,000.”

And so it transpired that the only-just-retired president of the Queensland Law Reform Commission, judge David Jackson, passed a telling judgement on the AG of Qld and her department’s failure to abide by model litigant provisions.