Tobacco company Philip Morris (PM) restructured its worldwide business in an abuse of process just so its Asian corporate entity could make a $4 billion claim against Australia for deciding to bring in plain packaging of cigarettes.

After restructuring in a hurry, PM claimed compensation under a “free” trade agreement between Hong Kong and Australia.

But they re-sliced and re-diced their corporation a bit too late: they were still covered in grease and oiliness from their internal company manipulations, so they didn’t enter the quasi-legal fray with clean hands, a “tribunal” found.
They could not have been very much too late, because it was back in 2005 that PM restructured, in anticipation of the 2012 Australian decision that smokes must be sold in “plain” packaging (actually, packaging showing gruesome photos).

PM’s smokey claim alleging restraint of trade before the ad-hoc tribunal took more than four years and cost many tens of millions of dollars, possibly $50m in total, in lawyerly fees. 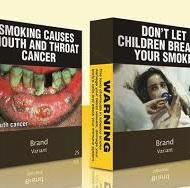 “Philip Morris, manufacturers of some of the world’s most recognisable brands, including Marlboro, lodged the challenge after the plain-packaging legislation was passed, using a 1993 trade deal between Australia and Hong Kong that included foreign investment protections,” the Guardian reported.

Defending the “legal” suit by PM is thought to have cost the Australian government, with its deep pockets, some $50m. Presumably, PM’s sales of smokes funded an equivalent amount on the claimant side.

The tobacco (and allied) company alleged that mandated plain packaging of cigarettes unfairly impacted on their business in Australia, and the nation had no right to do that. In other words, a national (or state, or local) government was not permitted to make decisions on health- or society-benefit grounds if doing so had a negative effect on a commercial firm’s corporate profits on existing products.

This farce came close to a final ending on 17 December 2015 when the arbitral tribunal decided that four years of PM’s posturing and proselytising amounted to airy nothingness, arbitrarily. The high-priced, three-person tribunal produced a ruling that:

“…the Tribunal can only conclude that the main and determinative, if not sole, reason for the (PM) restructuring was the intention to bring a claim under the Treaty, using an entity from Hong Kong… to gain protection under the Treaty in respect of the very measures that form the subject matter of the present arbitration,” the erstwhile tribunal unanimously decided and declared.

The three amigos, who presumably raked in gigantic fees as they took three years to come to this earth-shattering conclusion that had been available virtually on the first day of hearings, were all professors: from Cologne in Germany, Ottawa in Canada and Geneva in Switzerland. They were not judges, were not bound by courtly precedent, and their decision creates no precedent for other such claims.
Ironically, during the argument, PM claimed that it hadn’t restructured just to bring a claim under the Hong Kong–Australia Free Trade Agreement, it had actually restructured to gain international tax benefits, presumably impoverishing home-base Holland to some extent in the process.
Funny how tax avoidance was the lesser of two evils, according to PM when it was trying to skirt around a legal decisions of the top court in Australia. The company will now have great difficulty arguing why it should continue to not – apparently – pay a fairer share of tax to the Dutch nation.
So where has three years of hearings and about $100m of professorial and lawyers’ fees got us? Nowhere advanced, that’s for sure.

We are certainly no further than when a real court, the Australian High Court, decided in October 2012 that plain packaging laws were legal. (2012 HCA 43).
PM says “[t]he plain packaging legislation bars the use of intellectual property on tobacco products and packaging, transforming [PM Asia’s Australian subsidiary] from a manufacturer of branded products to a manufacturer of commoditized products with the consequential effect of substantially diminishing the value of [the Claimant’s] investments in Australia”.
The joke is that, after all this time, money and angst, no-one knows whether another tribunal, in similar but different circumstances not ‘stage-managed’ by a claimant, would rule that a country is liable if its newly-introduced law cost a corporation money.

Under the tribunal’s arbitration-based system, the PM case decision sets no precedent which another tribunal should follow.

Stay tuned for the next “legal” debacle, soon to come your way under the proposed Trans-Pacific Partnership (TPP) or Trade in Services Agreement (TISA) (global financial) agreements, the corporate guides to greed that will dominate international arbitration for the next five decades.
Free trade agreements and international tribunals are troughs holding folding green swill where all sorts of beasts go to feast at taxpayers’ expense.
The agreements are not really “agreed”, because they lead to numerous massive legal cases, like this try-on by PM. They are not really about trade, but about giving preferences to multinational corporations and select sectors, like agriculture, over the average city-dwelling worker toiling away in public or private service. And they are not really “free”, because corporations have tricky clauses slipped into the secretive FTAs to try to get their way over national governments.

Remember, the only reason this PM claim failed was that it didn’t get its “tax trick” in place soon enough: the decision could have been different if PM had restructured earlier, say in 2000 rather than 2005.

Note: Australia still faces a separate challenge against plain packaging in the World Trade Organisation: the Ukraine, Honduras, Indonesia, Dominican Republic and Cuba have argued the measure breached Australia’s international obligations. A decision is expected before the end of 2016.
ENDS