The smoking debate is vexed, and fanciful claims about second-hand smoke effect, particularly outdoors, do nothing to contribute to the tolerance needed for pro- and anti-groups to happily coexist.

Recent media reports (see for example http://www.abc.net.au/news/2016-04-06/knight-anti-smoking-pitch-an-assault-on-our-ciggie-rights/7301008) indicate residents of strata title apartment blocks are seeking the power to ban consumption of tobacco by other residents, in their own homes.

The press reports do not mention barbeque smoke but that is probably next, given the intolerance of others displayed by many anti-social members of (uncivil) society.

The threshold issue of whether dilute remnants of second hand smoke in the open air (e.g. on a balcony) can possibly be a health hazard is not even considered.  The starting assumption is that second hand smoke is ‘’toxic’’, although all available objective scientific evidence totally contradicts such a baseless belief, fuelled as it is by decades of publicly funded negative conditioning about the purported dangers of tobacco smoke.

Various irrational and indefensible comments confirm that prejudice, such as ‘’there is no safe level of exposure to tobacco smoke’’.  Incorrect: tobacco smoke is not cyanide gas and, as with any substance, the dose and duration of exposure makes the poison.  For example, thalidomide – responsible for horrific deformities in babies half a century ago when given to pregnant females, is today sometimes part of treatment for certain cancers.

According to the official Australian Government figures below, health zealots should drastically reduce their concentration on smoking (by at least half – but 95% would be more appropriate): a focus on suicide prevention is much more likely to save more young lives.  The ‘tobacco death’ talliers are prone to count anyone who dies having smoked one cigarette over a lifetime as ‘tobacco-related’…and most of the people tallied under ‘smoking-related deaths’ are well beyond middle aged.

Smoking-related diseases killed 14,900 Australians in the financial year 2004–05. This equals 40 preventable deaths every day.  The major tobacco-related diseases include cancer, heart disease and chronic obstructive pulmonary disease.  Smoking resulted in over 750,000 days spent in hospital and cost $670 million in hospital costs in the financial year 2004–05.

Note how that statement about the costs of three diseases contracted by most people at the end of their lives, and by non-smokers as well as smokers – such as cancer, heart, pulmonary – are cunningly twisted in the telling as if smokers are the only cause of medical costs associated with those diseases.  The costs cannot be exclusively attributed to smokers, because non-smokers die of the same diseases. You may as well attribute deaths from major disease to eating chocolate, drinking milk, or sucking on ice blocks.

Where are the direct deaths from consuming the ‘poison’ of tobacco listed though?  Perhaps ‘’tobacco related illness’’ is not the existential threat it is continually portrayed as, by the zealous tobacco control neo-prohibitionists.

Note too that the incidence of death from terrorist attack is by no means the major threat it is claimed to be by self-serving politicians practising the politics of fear and social control. 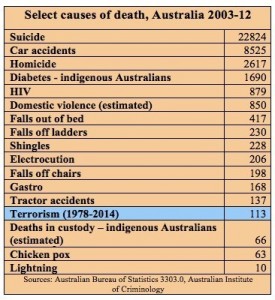 To help young boys and men, people with such zeal for health proselytising should devote their time to preventing suicide among males aged 15-44.  For children, car accidents are more dangerous than second-hand smoke, thousands of times over.

Second-hand smoke has never been proven to cause any death.  At an outdoor café, you’re more likely to suffer ill effects from diesel and petrol fumes, and colourless odourless carbon monoxide, than the next table’s lonely, brow-beaten smoker.

Smoking produces a distinct odour.  Some people like the smell but many, and particularly non-smokers, find the odour objectionable.  ‘Smell’ does not necessarily equate to ‘disease-causing’ or ‘death-inducing’.  If you’re a bigot, it doesn’t mean you have mental illness; just because you’re a health zealot, it doesn’t mean you’re blind and dumb, possibly just an obsessed monomaniac with a strong desire to use the full force of selective laws to control the lifestyles of others.

Zealotry against smoking is counter-productive to balanced and objective debate, and deflects attention from more appropriate community spending on causes of death with greater impact.  The same can be said of the zealous campaigns against breast cancer, which is not Australia’s most deadly cancer.  Annual prostate and bowel cancer diagnoses in Australia far exceed the number of breast cancer diagnoses.

Scare campaigns are counter-productive, whether individuals or entities apply them self-servingly to terrorism, to cancer, to tobacco consumption, or any other potential risk of daily life, no matter how insignificant.

The alleged health hazards of second hand smoke are firmly based in the worst kind of junk science, as continuously relied upon by self righteous anti smoking cultists, funded by the taxpayer to lobby governments for increasingly intrusive and restrictive hyper regulation of tobacco.

The US Occupational Safety and Health Administration (OSHA) assesses potential health risks using PEL’s (Permissible Exposure Limits) based on 8 hour periods of exposure to chemicals in indoor environments (the discredited Environmental Protection Agency is responsible for outdoor air, not that the US Government owns the atmosphere).

The OSHA PEL air quality standard for indoor air quality of respirable particulate (not otherwise specified) for nuisance dusts and smoke is a scientifically defensible approach.  The PEL standard is 5000 ug/m3 on a time-weighted average (8 hours a day, 5 days a week) and is intended to be protective of health over an average working life of 30 years.

Independent Public and Health Policy Research group Littlewood & Fennel of Austin, Texas, analysed the OSHA PELs and concluded that, to exceed permissible exposure to specified chemicals, the following quantities of cigarettes must be consumed in a small sealed room (9ft x 20ft) within one hour.

The claims of anti tobacco zealots that mainstream and sidestream smoke contains harmful chemicals is therefore true, but they show their bias by failing to also state that the levels are at such low concentrations that they are far below levels which could affect health.  It would also be rather an amazing feat for anyone, or however many smokers can fit in the test room, to consume such a huge number of cigarettes in the defined one hour period of exposure.

As a result of the tests, OSHA made this statement:

Remember, the OSHA field tests were conducted indoors, directly contradicting the ‘no safe level of exposure’ assertions the brainwashed anti smoking zealots seek to rely upon for outdoor smoking bans.

The objective conclusion is that second hand or sidestream smoke is not a health hazard at all: it is one of the great lies relied upon by tobacco control dictators (the other being that healthcare costs exceed revenue collected, a demonstrably fraudulent claim and a morally bankrupt argument, since tobacco taxes are assigned to general revenue not to healthcare for claimed tobacco related illness).

Residents of strata title units should aim to practice tolerance, and live and let live, rather than seek to regulate the private, very legal and extremely highly taxed smoking behaviour of their neighbours, on the most spurious grounds.

Cooking with spices can also cause smells some people don’t like in strata units…but we’re not – yet – banning the cooking of such Asian and Indian culinary delights.