Two officers from Pentonville prison in London are the first prison officers to die after suffering coronavirus symptoms, the UK Prison Officers’ Association has told the Guardian.

Mark Fairhurst of the POA said that 7900 prison staff, including officers, support staff and governors, were self isolating, and a further 15 had confirmed cases of coronavirus. 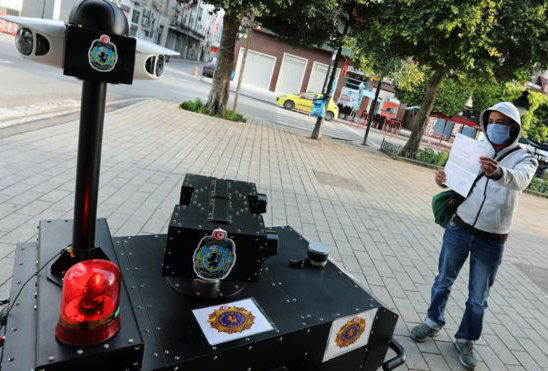 He also said that 90 prisoners had been confirmed as suffering from Covid-19, with another 1200 prisoners “self-isolating”. https://tinyurl.com/r86hkhv

A police robot, called a PGuard, has been deployed to patrol areas of Tunisia’s capital, Tunis, to ensure that people are observing a coronavirus lockdown.

If it spies anyone walking in the largely deserted streets, it approaches them and asks why they are out.

They must then show their ID and other papers to the robot’s camera, so officers controlling it can check them. – story credit: BBC NEWS http://tinyurl.com/syzopff Photo: EPA

Moscow City officials are using a giant network of tens of thousands of cameras – installed with facial recognition software – which they plan to couple with digital passes on people’s mobile phones. It’s prompted concern about whether such widespread surveillance will ever be rolled back.– BBC http://tinyurl.com/toebabr

…and some comments received by CLA:

Fishy logic: I lived through bloody communism in the early 80s locked up inside and here we go again. Mr Andrews (Vic Premier), how is it that we work together all week trying to follow social distancing and still all touching the same tools and materials, but on the weekend can’t even go surf fishing on an empty beach – or similar activities – even if social distancing is followed. Use some reasonable thinking here. ENDS

Risk assurance: I live in Melbourne and am willing to be plaintiff in a case against COVID-19 restrictions on civil liberties – freedom of association, travel, private property, etc – if CLA or other(s) will run the case (and carry the costs). Federal and state reactions have been way over the top. Jobs lost, schools closed, businesses shuttered, an economy wrecked, an exploding public deficit…and the entire population placed under what is, essentially, House Arrest, for an indefinite period. – Robert. ENDS

From the UK: …we’ve all experienced a mass stripping of our civil liberties, with the police given extraordinary powers which are already being applied unevenly. These powers could last for two years, way beyond the expected length of the pandemic. Of course sacrifices must be made, but throughout history governments have overstepped the mark in times of crisis. Hard-won rights and freedoms are too frequently taken away again under the cover of an emergency. And temporary suspension has a habit of turning into permanent erasure. – Liberty UK. ENDS

…what some people are telling CLA:

There is no pandemic: There is no pandemic in Australia now, in the UK, in Italy or wherever. …created in the media deliberately to create fear, to condition people to accept drastic erosion of their human rights which are planned to become permanent further down the track. WHO is a dangerous agency dominated by Gates and Rockfeller (sic) Foundations, Big Pharma, Big Banks, Murdoch…ENDS.

Destruction of civil liberties: The Governors (sic) have now broached the possibility that the time for the lifting of the shutdown restrictions could be pushed out till the end of 2021, I was waiting for it. COVID-19? Common flu is the real killer by comparison, yet they’ve never shut anything down because of it, so the claim that they are doing this to save lives has no real substance. – AC

Going cruising? Here’s a description of the Ruby Princess:

‘Luminous jewel on the seas’

“Fresh from a multi-million dollar renovation, Ruby Princess is a luminous jewel on the seas and a romantic destination in itself. She offers nearly 900 balconies from which to view the world, an array of entertainment options including Movies Under the Stars®, now with the industry’s best 7.1 surround sound for an immersive audio experience, and sumptuous dining options from Crown Grill to exciting new top deck dining venues including Slice Pizzeria and Coffee & Cones.” …and coronavirus, in early 2020.