The High Court’s reasons for rejecting the Wilkie/AME claims over the same-sex marriage plebiscite appear to be a clear case of the institution forgetting its own raison d’etre.

It leaves our Parliament at the mercy of the government of the day, with no impartial umpire to turn to when its rights and powers are transgressed. 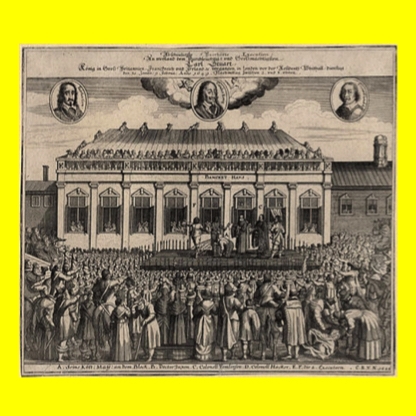 Beneath the passionate public debate over the merits of the same sex marriage (SSM) ‘postal survey’, the High Court’s decision was actually about one of the most important elements of Parliamentary democracy and the doctrine of the Separation of Powers: namely, that the Crown/government must go “cap in hand” to the peoples’ representatives (Parliament) to get approval to spend the peoples’ money.

The English considered this principle so fundamental that they fought a civil war over it in the 17th Century and the reigning English monarch lost his head as a result. (Illustration shows the beheading of Charles I on 30 Jan 1649 at Whitehall in London).

So, when Parliament voted down the SSM plebiscite (twice!) you’d think that would be it. No authorisation from Parliament, no appropriation.

Ahh but, as they say, this One Weird Budget Trick™ can help governments get around a pesky Parliament. And, unlike most tricks and life-hacks, this one now comes with the High Court of Australia’s tick of approval.

Its decision seriously weakens the principle that Parliament is the ultimate custodian of the nation’s money and abrogates the High Court’s responsibility as umpire in maintaining the balance of power between the Parliament and Executive.

This was one of the dangers that led independent Member for Denison, Andrew Wilkie, and Australian Marriage Equality Ltd, to separately claim that Finance Minister Matthias Cormann exceeded his powers when allocating federal money for the SSM postal vote.

Cormann and the Coalition government had found a way round having Parliament vote the money to conduct the poll. They plucked funds from the ‘emergency’ allocation bucket set aside in each annual Budget for the Finance Minister to use for ‘urgent’ and ‘unforeseen’ events. You might assume that this emergency fund would be used for, well, emergencies. But it has been raided over the years by the Coalition and Labor governments to fund things from sports halls to the Australian Ballet and the Centre for Rowing Excellence in New Town Bay, Tasmania. Like beauty, ‘urgent’ is in the eye of the beholder.

The government believed it had a major catastrophe on its hands: it couldn’t get its plebiscite legislation through parliament but had to do something about SSM. Its needs were “urgent” so it put its hands in the emergency bucket.

Trickery trumps will of the people

Not so fast, said Wilkie and AME, the government should not be permitted to use trickery to defeat the clear will of the parliament – twice the Parliament has voted down the idea of the plebiscite, now the government is playing the emergency card to trump “the will of the people”.

Here is where we would expect the High Court, the constitutional guardian and watchdog of the boundaries between each branch of government, to step in and adjudicate the law. But alas, the High Court seems to have washed its hands of responsibility.

The High Court decided to leave the Parliament at the mercy of the Executive (ie, the PM and top Ministers in the government) when it comes to safeguarding how money is spent.

The High Court essentially said (at para 91) that if Parliament wants to limit what the government spends money on in the name of “urgency”, then it is up to Parliament to do so, not the High Court.

Which seems to forget what actually led to the SSM postal survey and High Court case in the first place: Parliament voted down the plebiscite twice and wouldn’t have supported a new bill to fund the postal survey. But the government could fund it anyway using the emergency fund included in the main budget bill passed back in May.

The High Court said this was fine because Parliament allowed this budget trick to exist in the first place and Parliament could remove it in the future. This seems logical. It is certainly a nice clean ‘legal’ reading.

Meanwhile the other House, the Senate, can’t (doesn’t have the constitutional power to) amend a budget bill, only block it (as per the 1975 Constitutional crisis). Ever since that 1975 kerfuffle, the ALP has vowed to never block the main appropriation Bill, which means the Senate will never have the numbers to force a change to this newly-endorsed budget trick.

Except in the event of a hung Parliament (where the government of the day doesn’t control the lower house), Parliament will never get back control and be able to place further conditions on this One Weird Trick to prevent any future government from spending money on initiatives that have been explicitly disavowed by the Parliament.

In short, the High Court said that if Parliament and the government have a dispute over their powers, it is for the Hich Court to sort mattersout. Never mind that, in the game of life, it’s not a level playing field or that surely the role of the High Court entrenched in the Constitution is to arbitrate such disputes.

* Tim Vines is Vice-President of Civil Liberties Australia. He is currently completing a PhD in Law at the Australian National University.