As the US President leaves office, traditionally he pardons a range of people: Civil Liberties Australia is asking that Obama pardons Julian Assange, Edward Snowden and Chelsea Manning. 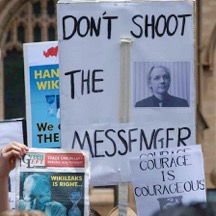 Just before completing your second term, please pardon Edward Snowden and Chelsea (Bradley) Manning, and also decree that Julian Assange is pardoned for any potential charge in or concerning the USA relating to release of information by him or WikiLeaks before the date of your declaration.

In relation to Snowden, your Administration has already declared there was public benefit in his actions:

Director of National Intelligence James Clapper said that the disclosures made by former National Security Agency contractor Edward Snowden had driven the intelligence community to become more transparent to citizens about how it does business. Clapper said: “… it forced some needed transparency, particularly on programs that had an impact on civil liberties and privacy in this country…” http://tinyurl.com/oc27knp

In relation to Manning, it is arguable that the US military’s treatment of him was responsible for his behaviour, which opened the eyes of the world to actions since abandoned by the USA.

With Assange, the world has benefited from much of the released material: so has the USA.

The actions of all three have provided more benefit than harm. Comparing their behaviour to that of US military and intelligence resources over the past decade, the collateral psychological damage produced by Snowden, Manning and Assange is miniscule by comparison with the collateral physical damage of bombs and erroneous and/or inappropriate acts by US forces and intelligence agencies. If one set of collateral damage is to be excused, it is only reasonable that other collateral damage is treated equally.

You came to power promising the US and the world a more humane rights and civil liberties-oriented approach to human affairs. Your term has faced many difficulties in achieving this bold promise, globally and nationally. You have the opportunity, as you leave, to prove that – where it is in your power to do so – you will live up to your noble aspirations.