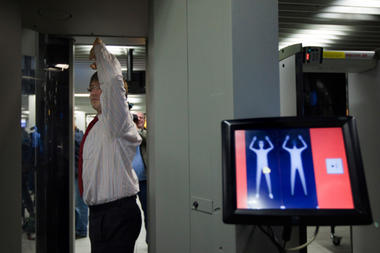 The announcement that full body scanners will be used at Australian airports is drawing flak from many quarters. It is particularly galling, CLA says, that the Australian Government won’t allow “opt out” alternative procedures, as occurs in Europe and the USA. This amounts to ‘digital strip searching’, CLA Director and media spokesperson, Tim Vines, says.

Civil libertarians are worried by proposed legislation meaning passengers will not be able to opt out of undergoing full body scans at Australian airports, the ABC reports.

The Federal Government will introduce legislation this week (6 Feb 2012) so the technology can be rolled out in all of Australia’s international airports.

The move follows a trial in Sydney and Melbourne.

Except for travellers with serious medical conditions, all passengers will have to go through the scanners if asked by airport staff.

Civil Liberties Australia director Tim Vines says the scanners will amount to an unnecessary digital strip search of citizens who want to travel.

He says passengers should be allowed to request a pat-down.

“In the European Union, where they do allow these types of scanners, they have issued a directive that says governments must provide citizens with an option to opt out,” he said.

“We think that, as in the US and in Europe, people should have the option of opting for pat-downs rather than having to go through the digital strip search of the full body scan.”

Transport Minister Anthony Albanese says people’s bodies will appear only as outlines, and the images will not be able to be copied and will not be stored.

“[The scanner shows] a generic male outline, a generic female outline – it simply will identify the spot on the outline where there’s something that needs to be checked,” Mr Albanese told Sky News.

Full body scanners were introduced as airports ramped up security after the foiled 2009 plot when a Nigerian man boarded a plane with explosives in his underwear.

Their use in the US has been criticised on health and privacy grounds, and flyers there can opt to receive a pat-down instead of going through the machines.

But only one type of full-body airport scanner – the backscatter x-ray machine which is used in some US airports – exposes individuals to ionising radiation.

The Federal Government says that type of machine will not be used in Australia.

“The millimetre-wave body scanners are perfectly safe and one body scan is comparable to passive exposure to a mobile phone used several metres away,” Mr Albanese said in a statement.

Mr Vines says he is pleased a “safer, if still intrusive,” technology has been chosen but believes the devices have no track record of making airports safer.

He says a security agent in the US was able to smuggle a handgun through a full body scanner multiple times.

“In response to each incident – which we were told wouldn’t happen because of the technology that was in place before it – new technology is brought in to assure us that everything is safe.

“But there is no guarantee that these new devices will be protective, and what we’ve given up in terms of civil liberties and our privacy is a real loss.”

Mr Albanese said tens of thousands of Australians had volunteered to be checked during the trial at the Sydney and Melbourne airports.

“We have the most secure and safe aviation record of any country in the world and we need to make sure that we keep that,” he said.

“The public would rather that there are not security threats, but given that there are, they need to know the Government is doing all in its power.”