Two experts on the Sue Neill-Fraser case have asked Tasmania’s Attorney-General, Elise Archer, to request the Court of Criminal Appeal to re-open an appeal to consider alleged enormous failings by Tasmanian Police in their investigations of the murder charge 12 years ago.

Throughout the long-running saga, there have been constant murmurings and rumblings about the quality and integrity, or otherwise, of the police investigation. This is the first time the behaviour of TasPol has been attacked head on.

It has never been done in court.

The police failings are so gross, the experts say, that immediate acquittal of Sue Neil-Fraser is a distinct possibility. They give chapter and verse over 55 pages which analyse and report on the police investigation.

Their document lodged with the AG is titled: “What TasPol knew and ignored”.

The current Neill-Fraser appeal against conviction for murdering her husband, Bob Chappell, on a yacht moored in Sandy Bay Hobart in January 2009, was heard over three days five months ago. That case is effectively in limbo, awaiting the decision and published reasons of three judges of the appeal court, under judge Helen Wood.

Neill-Fraser has served 12 years of an original 26-year sentence, reduced to 23 years after an earlier appeal a decade ago. She becomes eligible for parole in August 2022.

The two experts who claim that TasPol’s investigation was so flawed that the original conviction should be abandoned are extraordinarily highly qualified.

One, Hugh Selby (photo, left), is a barrister who educates other barristers to Masters degree level. For 33 years he edited ‘Expert Evidence’. Selby has appeared for clients in courts throughout Australia, including in Tasmania and at the High Court, and has trained people to give evidence in court…including police.

The other, Barbara Etter (photo, right), was possibly Australia most-qualified-ever police officer. She holds a masters degree in Law, a bachelor’s degree in Pharmacy/Chemistry, and an MBA in Management as well as a Company Director’s Diploma. In terms of forensic knowledge, she is a Fellow of the Australasian College of Biomedical Scientists.

No longer practising law, she was inaugural CEO of the Integrity Commission of Tasmania, Assistant Commissioner of WA Police for Corruption Prevention and Investigation, and for 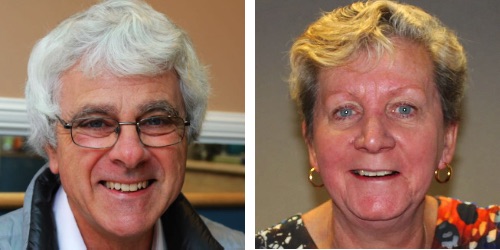 Professional Development, and is a former Director of the Adelaide-based Australasian Centre for Policing Research. She has an Australian Police Medal for distinguished service and is for former WA Telstra Businesswoman of the Year.

For five years until about 2017 she was Neill-Fraser’s pro bono (“for free”) lawyer.

The two authors claim that police failed to investigate aspects of the case which they knew about, but avoided or ignored. The police failings were enough to corrupt the integrity of the evidence they provided to the Office of the Director of Public Prosecutions.

But, allied to those failings, were a raft of untruths, falsehoods and erroneous suggestions, Selby and Etter say.

None of those matters were raised during the March 2021 appeal, meaning Neill-Fraser has never received justice, the pair suggest.

Legally, they quote a formal comment by Ian Callinan in the High Court of Australia, which basically says that a police investigation that was unfair and incompetent would make any verdict unsafe and unsatisfactory. Callinan’s statement was even cited favourably by the Neill-Fraser trial judge, now the Tasmanian chief judge, Alan Blow, in another case four years ago, so it has direct relevance top the Neill-Fraser case.

Selby and Etter say the Neill-Fraser investigation was deeply flawed. “The basic building blocks for an impartial, efficient, and effective investigation are simply missing,” they say.

The claim they have extra evidence (including material obtained under RTI – as the Freedom Of Information process is known in Tasmania – and other sources) available to indicate critical procedural deficiencies by TasPol in:

“In the interests of justice and clear adherence to maintaining confidence in the Rule of Law it is imperative that the Attorney-General act immediately to reopen the appeal process currently before the Supreme Court,” Selby and Etter said to AG Archer in early August 2021.

“In such a re-opened appeal, the Crown should be represented by independent counsel, brought in from interstate and with no professional or social backgrounds with the Tasmanian ‘lawyer actors’,” they say.