The decision by Attorney-General Mark Dreyfus to discontinue the prosecution of Bernard Collaery (1) has left some important questions unanswered, particularly in relation to the insistence on keeping the proceedings secret, contrary to the principles of open justice.

Why would the prosecution go to such extreme lengths to preserve secrecy if the only item they were concealing was already obvious to anybody remotely interested in the matter?

It is generally believed that the bugging by ASIS of the Timor Leste government offices took place specifically to eavesdrop on the Timorese leaders in order to learn their bargaining strategy in the negotiations with Australia over the maritime boundary in the Timor Sea.

This is implausible. We are asked to believe that ASIS engaged in a major operation for the sole purpose of anticipating the approach of the Timorese government in negotiations in which the main beneficiary was not the Australian Government itself but an Australian company, Woodside Petroleum.

Moreover the court initially upheld the prosecution’s demand for secrecy: it is unlikely that the court would have made such a ruling if the only issue was the bugging of the Timorese government during the negotiations over the oil a and gas deposits, since that was already public knowledge.

We now know that the spying on the Timor Leste government went back further than the time of the 2004 negotiations, at least back to 2000. It is not hard to understand why ASIS would have engaged in the spying operation, for reasons more significant than the maritime boundaries.

Despite the free and fair elections that occurred post-independence, there would have been concern over the potential for political instability. During the years of Indonesian occupation there had been a significant authoritarian left influence both in the Fretilin-led internal resistance and in the external committee (whose members had escaped from Timor Leste before the Indonesian invasion), and they came to dominate the Fretilin government that followed independence.

Links to other nations

That government established strong links with Cuba, and like other authoritarian left governments was not likely to relinquish its political power readily.

It is also worth recalling that tension between Fretilin and its opponents led to civil war before the Indonesian invasion. It would have been obvious to ASIS that there was a risk of political instability post-independence, and its concern would have been vindicated by the armed conflict that arose in 2006 which led to the ADF and other military forces returning to Timor.

There were also links to China, which built the Foreign Affairs Department building and the Presidential Palace in Dili, the Timor Leste capital.

It is therefore clear that ASIS had every reason to learn as much as possible about the internal politics of Timor Leste.

Yes, ASIS spied on Timor Leste during the maritime boundary negotiations, but the eavesdropping was part of espionage that had been ongoing since independence, for reasons more important than who owned the oil and gas deposits in the Timor Sea. It is likely that the eavesdropping during the oil and gas negotiations was merely an opportunistic use of the spying technology that had been installed for those more important reasons.

Just as there was a government in Timor Leste willing to hold on to power by any means, so there were opponents of that government, and this leads to a highly plausible reason for the prosecution’s insistence on secrecy during the Collaery hearings.

There was a very revealing interview of Paul Symon, the Director-General of ASIS on the ABC 7.30 report in June 2022, in which he emphasised that a prime concern of ASIS was to protect the identity of its sources. It is plausible that the bugging of the Timor Leste government offices took place with the knowledge – and perhaps the help – of some individuals in Timor. Given the opposition that we know existed to the Fretilin government, such individuals would not have been hard to find.

For its part ASIS would be very concerned to protect the identity of its Timorese collaborators, hence the need for secrecy during the hearings in the Collaery and Witness K hearings.

It is surprising that the prosecution took so long to realise that the best way to protect the identity of the ASIS sources in Timor Leste would be to terminate the prosecution. It is probable that the Director-General of ASIS eventually found a sympathetic ear in AG Dreyfus following the election of the Labor government.

Unlike most actions launched by the DPP, the prosecution of Collaery and Witness K required the authorisation of the Attorney-General. This meant of course that Dreyfus had the power to revoke the authority initially given by Coalition AG Christian Porter and upheld by his successor Michaelia Cash.

It is likely that Dreyfus, who had not previously opposed the prosecution, saw the opportunity to make a virtue of necessity: the necessity of protecting ASIS sources by closing the case also afforded the virtue of improving relations with Timor Leste, while also projecting his image as some kind of civil libertarian.

Nevertheless it is reprehensible that this costly pursuit of Bernard Collaery and Witness K continued for so long.

The tactic of the Coalition government was to stay silent on the matter. Nobody in the Coalition openly supported the prosecution beyond saying that the matter was up to the courts – as if the decision to prosecute was made independently of the government in the first place. The Labor Party when in opposition may well have indicated to the government that they supported the prosecution, despite their reluctance to admit this publicly.

In 2018 I proposed to the South Australian ALP State Convention that the prosecution of Collaery and Witness K be dropped, only to be opposed by Senator Penny Wong.

Certainly the craven acquiescence of the Labor Party – and the silence of the mainstream media – imbued the Coalition government with confidence that they could continue the prosecution with impunity. It is ironic that the ALP has now learned that a bipartisan policy on matters of national security, with which Labor was obsessed in opposition, only applies when the Coalition is in government!

It is worth reflecting that by withdrawing the prosecution of Collaery, Dreyfus may have saved the government from a humiliating defeat. This had already occurred in the case of Collaery’s erstwhile client and co-defendant Witness K, the former agent, who pleaded guilty to the charge of conspiring to release classified information over the spying operation in Timor Leste.

Despite the prosecution contention that this was a non-trivial case, Witness K was given a three-month suspended prison sentence, a clear rebuke to the prosecution. The magistrate said that the sentence was “to send a message to others” by which he clearly meant the government had been heavy-handed.

The DPP apparently chose to not interpret it as such since the prosecution of Collaery continued for a further year.

Had Collaery eventually been convicted, his case would likely have ended in the High Court of Australia. As shown in the Palace Letters case where lower court judgements were decisively overturned, the High Court is immune to bullying from government authorities who purport to embody the national interest.

It is quite likely that a High Court judgement would have been an even more chastening experience for Collaery’s pursuers than the slap on the wrist given to Witness K.

Note 1: Bernard Collaery is a Canberra-based barrister and lawyer. He was a member of the ACT’s first Legislative Assembly in 1989 and was Attorney-General for three years and Deputy Chief Minister between 1989 and 1991. A former Australian diplomat, he represented Timor Leste for many years and was also pre-authorised as a lawyer to handle sensitive security cases. The Australian Coalition government raided his offices in 2013, and in 2018 charged him with “thought offences” (conspiring to communicate secret information to the government of Timor Leste and others). After years of secret hearing of secret evidence in secretive sittings of ACT courts, the federal Labor Attorney-General Mark Dreyfus dropped the charges against him. 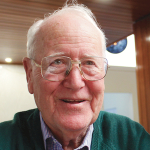 * Dr Richie Gun is a medical doctor and former anaesthetist who was the Labor Member of the House of Representatives for Kingston SA between 1969 and 1975. After serving as a politician, he became a leading expert on occupational health and safety. In 2015 he was appointed AO “for distinguished service to medicine, particularly in OH&S, and to socially disadvantaged communities in regional Australia and Timor Leste”.