As hate gripes in upon the world from all sides, Lou Coutts turns inwards for solutions and contemplates comparisons with the short life and beauty of the butterfly.

Butterflies wing it, why can’t we? 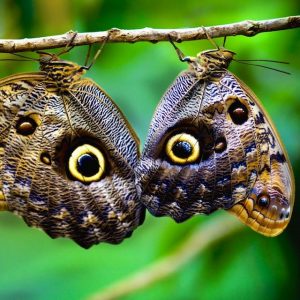 I have begun asking myself if I should live in a cocoon. I seem to be consumed by a world that I can no longer understand and it frightens me.

I can vaguely remember the world of my childhood when all I knew was the innocence of the cocoon in which my nurturing parents shielded me from harm. But that was simply a prelude to lost innocence. Cocoons are merely staging posts, and just as the child gradually emerges into the world of lost innocence, so the caterpillar transforms itself into the butterfly that spreads its beautiful wings in the first flash of sunlight when shedding its cocoon. It then becomes part of the world.

I wonder if the butterfly understands its world in the brief moments of its post-cocoon life. Butterflies are so beautiful, especially on a summer morning when the early sun reveals silhouettes of veins that delicately decorate the happy flapping wings. Its role is so simple and once it has tasted the flowers and played its part in reproducing its species it abandons the world. Yes, it has an untroubled life in its small innocent free world which, I am sure, it understands. I still remember the butterflies of my childhood summers and the wonder I never ceased to experience at their magical beauty. Looking back on those years I realised that the sight of their beauty uplifted my spirits and I rejoiced in the innocent loveliness of nature.

I have already lived in the cocoon of my childhood and like the butterfly have been released into the world but one which I no longer understand and which I find frightening. From the frightening police camera in the street which gradually metamorphoses into an impersonal letter in your letter box to conflicts, murders, rapes and other obscenities that are daily occurrences, the world seems to have gone crazy and that is when I think about entering a cocoon. But I am met with the roadblock that cocoons are transitory and merely prepare us for the next stage of our life. They aren’t permanent but remind me that we have to live in this world…and so I get angry.

I get angry at politicians who I think are stupid because they don’t think the way I think or share my view of the world. I get angry at people, who, because of some strange beliefs, embark upon wanton destruction. I particularly get angry when I realise that this has been endemic in civilisation.  The Romans persecuted the Christians. The Christians wrote an obscene chapter in history during the Inquisition; the Tsars mercilessly persecuted the majority of the Russian population. Their successors exterminated upwards of thirty million of decent Russian people. The West became involved in an horrendous episode in Vietnam. This tendency to resort to violence against “unbelievers” or people who don’t share our views characterises our global society.

The fundamental assumption of global society is that weapons of increasingly destructive capacity are the corner stones of our freedom. Accordingly two trillion dollars are spent globally each year on “defence”. A secondary assumption is that financial deprivation will bring about a result favourable to whoever has the most financial fire power. This causes people to starve.

We have run amok with violence and this is where my anger is fed by incredulity, or, if you like, a complete lack of understanding of why we have reached this stage of lost innocence. The volume of ugliness becomes unbearable and that is when I long for the silence of a cocoon.

Why can’t the world be beautiful like a butterfly? I keep asking myself that question and the answer came to me from a most unexpected source. A Russian friend, with whom I correspond, recently wrote to me about this issue of violence, greed and lust that is so much part of our society and she pointed out to me that we cannot change other people. We can only change ourselves and so our role is to continue to strive to be a better, to be beautiful like a butterfly. It is me who I have to change!

Is it presumptuous to want to be as beautiful as a butterfly despite my years of lost innocence? The next question I asked myself is “what do I have to do to be beautiful?” and the answer seemed so obvious. There is so much hatred in the world and so much violence. The opposite of hatred is love. Why is there so little love in the world?

In Judeo Christian society, love has taken a strange turn. It is OK to love one’s wife or husband, children, parents, brothers and sisters and grandparents. However, beyond that circle, love is frowned upon and considered by some to be positively sinful. And yet, if everyone in the world loved everyone else, what a wonderful world we could have. We could all be as beautiful as a butterfly. But we identify enemies and hate them and spend two trillion dollars a year demonstrating our hate. How much do we spend on love? To how many people do we say “I love you?”

There was a famous dissident during the Soviet occupation of Czechoslovakia called Vaclav Havel who wrote some of the great dissident literature. After the fall of the Berlin Wall he became President and was asked to give a peace talk in Paris. In his talk he said that when he became President, he wanted to do so much and wanted to change so many things and so many people that he became impatient and angry when he couldn’t. He then realised that he had been making the same mistake as his predecessors. Then like a revelation, he discovered that all he could do was “plant a seed, water it and wait”.

Perhaps if we all started to plant a seed of love and keep nurturing it, we might become more beautiful and you never know what the outcome of that might be. We could all become butterflies and be happy to leave our cocoon and live in the world.