A leading legal body in Australia is so deeply concerned about abuses of the Rule of Law in Australia that is compiling evidence of transgressions and planning a national conference.

ICJ to campaign for rule of law

The International Commission of Jurists is mounting a project Australia-wide to raise awareness of legislatures and bureaucracies abandoning commitments to the Rule of Law.

In the first stage, ICJ Victoria will compile an inventory throughout the nation of laws and administrative procedures that do not sit easily with traditional concepts of the Rule of Law.

“An individual piece of legislation or a specific administrative act might be explained on the basis of a particular exigency, (but) collectively these legislative and administrative acts are forming a worrying pattern in a country that is said to be committed to the Rule of Law,” project convenor, barrister and ICJ life member Louis Coutts said.

After compiling the inventory, ICJV will involve other Australian chapters of ICJ Australia and hold a national conference to create wider awareness.

The conference is likely to be held early in 2016.

Examples that have provoked ICJV concern include: 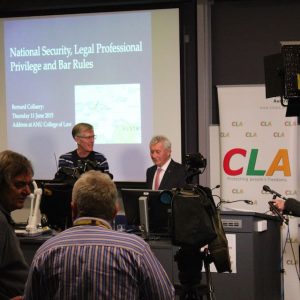 Photo: Bernard Collaery speaks at ANU about the raid on his office.

There are many such examples in many different areas of the law, Mr Coutts said. “I am writing to you to see if you can assist in this project by supplying details of questionable issues in your particular area of expertise.”

For further information contact convenor Louis Coutts at couttslm@bigpond.com or on 0400 056 012.