What came first? The statistics, or the election campaign? Qld’s police commissioner gives a none too convincing explanation on ABC Radio of why he released crime figures early.

In the wake of the July 2014 Stafford by-election, Queensland Premier Campbell Newman’s critics say the government and the police are too cosy for comfort. Cathy Van Extel of Radio National investigates whether the Sunshine State is returning to the dark old days.

This article is from a Background Briefing investigation. Cathy Van Extel’s full report was first broadcast on Sunday 27 July at 8.05 am. It is also available on podcast link.

Queensland Police Commissioner Ian Stewart has defended his decision to publicly back the Newman government’s law and order agenda in the dying days of the recent Stafford by-election campaign.

The LNP suffered a disastrous 18.6% swing against it in the inner Brisbane seat.

The police commissioner maintains he did nothing wrong in releasing preliminary end-of-year crime statistics in the heat of a by-election campaign. ‘The interview I did where I made those comments was not organised by me. It was requested by a member of the media,’ says Mr Stewart.

According to Mr Stewart, the crime statistics will not be finalised for two to six weeks. During the campaign, the Queensland government claimed the crime rate had fallen because of tough measures such as its controversial bikie legislation. 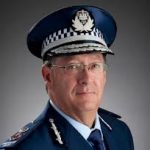 The police commissioner (left) says he did not need to consider the political implications of his comments. ‘I was talking about the Queensland Police Service. What occurs in government and the statements they make, for whatever reason, is a matter for them.’

Mr Stewart says that while the actual use of the VLAD laws so far has been small, police need them. ‘The important issue for me is the laws are there for us to use when necessary, where the circumstances specific to those laws are available to us. But the reality is our focus on all of the crime that is committed by these gangs has had a particularly positive effect not just on the Gold Coast, but right across Queensland.’

Queensland Council for Civil Liberties Vice-President Terry O’Gorman, however, says the senior executive of the QPS has become an active cheer squad for the bikie laws to please the Newman government.

‘The police service and the senior police are there to investigate and to make arrests under acts of parliament that are passed by the government,’ says Mr O’Gorman. ‘The senior executive service are not there to call blazing press conferences every time a bikie is pinched to say how good and how effective this bikie legislation is. In doing that they are deliberately moving into the area of political comment and political support of the government for legislation that is highly controversial.’

Mr O’Gorman says it was inappropriate for the commissioner to discuss new crime statistics in the lead-up to the Stafford by-election. ‘[He] ought full well know that police commissioners do not release, nor do they initiate, nor respond to discussion about crime statistics in the lead up to either by-elections or full state elections. He ought to remember the controversy during the Fitzgerald era where [Tony] Fitzgerald in his report made particular findings that during the ‘70s and ‘80s police used to regularly release crime statistics that were wrong in order to support the government of the day.’

Bond University criminologist and former police officer Dr Terry Goldsworthy is also concerned that the QPS is once again being used as a political tool. According to him, normal operational police matters are being taken over as a political narrative by politicians.

‘You should leave the police separate, let them do their job and the politics [should] stay out of it,’ Dr Goldsworthy says.

He is also concerned about a police-led publicity blitz in recent months aimed at drumming up support for the VLAD laws. Dr Goldsworthy says a string of TV reporters and crews have accompanied heavily armed operational police on raids on bikie gangs. The aim, he says, has been to get positive prime-time coverage and it is becoming more difficult for critics of the laws to have their say in the media.

An appeal against the VLAD laws is due to be heard in the High Court next month.

Concerns about the politicisation of the QPS extend to some members of parliament. The deputy chair of the Queensland Legal Affairs and Community Safety Committee, Peter Wellington, says police have refused to make submissions on private members’ bills. ‘I believe they’re afraid their advice might contradict the advice of the government. So this is actually ridiculous,’ he says. ‘When the parliamentary committee is considering a proposal to change the law that impacts on our police service and the police service is not prepared to make a submission, it’s wrong.’

Mr O’Gorman agrees that the lack of police input is a worrying development. ‘If it is true that the police service are not appearing before that committee in relation to non-government legislation, then that is clear proof that this senior executive service, including the commissioner, have become overtly political,’ he says. ‘I challenge the police commissioner to make a statement as to whether that is true.’

Commissioner Stewart confirms the QPS declined to make submissions on two non-government bills. ‘There was no necessity for us to provide any further submission to this committee,’ he says, ‘because there was nothing there I could do to further the argument.’