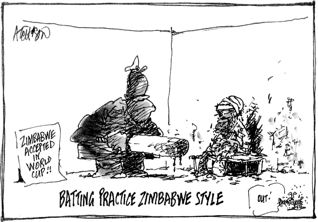 Cartoonist Michael Atchison OAM died in February 2009 – CLA salutes his contribution to the community, including the four cartoons he generously donated to the CLA touring exhibition, ‘Laughing With Knives’. During 40 years at the Adelaide Advertiser, Atchison received awards such as the 2004 SA Media Awards Hall of Fame, Australian Cartoonists’ Association Jim Russell Award and highly commended in the national Walkley Awards. CLA’s thoughts go out to his family, friends and colleagues.