Independent US Senator Bernie Sanders is campaigning to defeat the secret trade deal, which is likely in 2015 to be inflicted on unsuspecting citizens of 12 nations.

‘TPP agreement must be defeated’ 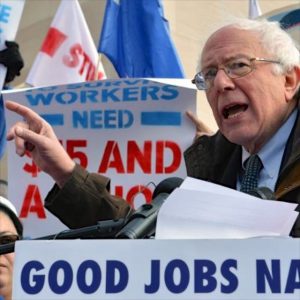 Senator Bernie Sanders has asked the chief trade representative for the United States to turn over the full text of a proposed Trans-Pacific Partnership trade agreement.

The 12-nation pact, which could soon come before Congress (for endorsement), has been negotiated in secret but with input from corporations that stand to profit on the deal. In a letter to US trade representative Michael Froman, Sanders (photo) called it “troubling” and “unacceptable” that the only sources for Congress to assess what would be the largest global trade deal in history are a few leaked documents.

“It is incomprehensible to me that the leaders of major corporate interests who stand to gain enormous financial benefits from this agreement are actively involved in the writing of the TPP while, at the same time, the elected officials of this country, representing the American people, have little or no knowledge as to what is in it,” Sanders said in the letter. “In my view, this is simply unacceptable.”

(Citizens of the 12 countries involved in the TPP, including Australia, have been studiously kept in the dark about the agreement: all negotiations have been in total secrecy – Ed.)

Sanders recently outlined the dangers he saw, to America, in the TPP:

The Trans-Pacific Partnership is a disastrous trade agreement designed to protect the interests of the largest multi-national corporations at the expense of workers, consumers, the environment and the foundations of American democracy. It will also negatively impact some of the poorest people in the world.

The TPP is a treaty that has been written behind closed doors by the corporate world. Incredibly, while Wall Street, the pharmaceutical industry and major media companies have full knowledge as to what is in this treaty, the American people and members of Congress do not. They have been locked out of the process.

Further, all Americans, regardless of political ideology, should be opposed to the “fast track” process which would deny Congress the right to amend the treaty and represent their constituents’ interests.

The TPP follows in the footsteps of other unfettered free trade agreements like NAFTA, CAFTA and the Permanent Normalized Trade Agreement with China (PNTR). These treaties have forced American workers to compete against desperate and low-wage labor around the world. The result has been massive job losses in the United States and the shutting down of tens of thousands of factories. These corporately backed trade agreements have significantly contributed to the race to the bottom, the collapse of the American middle class and increased wealth and income inequality. The TPP is more of the same, but even worse.

During my 23 years in Congress, I helped lead the fight against NAFTA and PNTR with China. During the coming session of Congress, I will be working with organized labor, environmentalists, religious organizations, Democrats, and Republicans against the secretive TPP trade deal.

Let’s be clear: the TPP is much more than a “free trade” agreement. It is part of a global race to the bottom to boost the profits of large corporations and Wall Street by outsourcing jobs; undercutting worker rights; dismantling labor, environmental, health, food safety and financial laws; and allowing corporations to challenge our laws in international tribunals rather than our own court system. If TPP was such a good deal for America, the administration should have the courage to show the American people exactly what is in this deal, instead of keeping the content of the TPP a secret.

10 Ways that TPP would hurt working families in the US:

Once TPP is agreed to, it has no sunset date and could only be altered by a consensus of all of the countries that agreed to it. Other countries, like China, could be allowed to join in the future. For example, Canada and Mexico joined TPP negotiations in 2012 and Japan joined last year.

* Bernie Sanders – who is independent of the major parties – in 2015 is serving his second term in the US Senate after winning re-election in 2012 with 71% of the vote. His previous 16 years in the House of Representatives make him the longest serving independent member of Congress in American history.

Before being sworn in as a senator in 2007, Sanders was one of only 66 members in the US House of Representatives to vote against the USA Patriot Act. He also introduced the first legislation in the House meant to undo some of the unconstitutional provisions in that bill. In the Senate, Sanders has focused on important civil liberty issues, including reining in the NSA’s warrantless wiretapping program, restoring habeas corpus rights, controlling the use of wide-sweeping presidential signing statements and putting an end to torture. He has introduced S. 1168, the “Restore Our Privacy Act,” to amend the PATRIOT Act to curtail overly broad surveillance by the government. He also sent a letter in 2014 to General Keith Alexander, then-head of the NSA, asking if the NSA spies on Congress. The general’s answer prevaricated, saying the NSA “did nothing illegal”…which a Congressional report has since found to be a major overstatement.