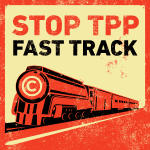 As US mid-term and presidential elections inch closer, politicking could destroy the Trans-Pacific Partnership deal, even if greedy copyright, pharmaceutical and dispute resolution clauses don’t. 24 July 2014

And, also as usual, there was no agreement. The Japan Times reported agreement was unlikely in 2014, and even more doubtful in 2015 when the putative deal would increasingly become a casualty of the 2016 US presidential campaign.

The TPP agreement has been under negotiation for nearly a decade*, and Australia is a proposed signatory.

Most chapters of the agreement deal with domestic law and policy, more properly the province of elected governments. A major area of concern is the proposed imposition of a new framework for intellectual copyright legislation, favouring profits for large corporations at the expense of the public good, with serious consequences for internet access and public health.

From the perspective of public health, the changes will lengthen drug patents and increase the cost of pharmaceuticals, putting many medicines beyond the reach of the poor.

Several negotiating countries balked at the blatantly anti-public health provisions, so the US proposed giving the poorest countries more time to comply with a few provisions.

According to a new US proposal, TPP countries would be divided into two groups using the World Bank’s income classification system. Countries currently falling below the high-income line (eg Malaysia, Mexico, Peru and Vietnam) would be temporarily exempt from three of the most harmful provisions, each of which would serve to block or delay the availability of more affordable versions of medicines.

Other provisions similarly harmful to public health would still be immediately required of all countries. The limited exemption would remain in effect for a specific time, which would either be determined by when the country graduates to “high income” status, according to the World Bank income classification, or be arbitrarily set through a TPP “transition” period.

US negotiators have described this proposal as an important concession in the interest of public health. But further analysis by Oxfam and MSF reveals that the US plan would not only leave the worst aspects of the TPP intact, it would be devastating to hundreds of millions of poor people in all TPP countries. It would also further exacerbate income and health inequalities in these countries.

The US proposal draws an arbitrary and unfair line to determine which countries would have to comply with all TPP provisions right away. World Bank income classification is an inappropriate measure of a country’s or a population’s capacity to afford high-priced medicines. The World Bank classification dates back to the 1980s and only measures a country’s per-capita average of total income. Looking at average income doesn’t account for uneven distribution of income within a country, or its public health needs. The map of poverty has changed since the 1980s. Today, the majority of the world’s poor no longer live in poor countries, but rather in places where there is greater wealth along with higher inequality, the critiques say.

There are also grave concerns about the implications of copyright changes for internet access. In the absence of any scheduled session for input from the public or civil society, the Electronic Frontier Foundation and the Fair Deal Coalition organised their own event, next to the venue housing the TPP negotiations. They invited delegates of the 12 TPP countries to attend talks by two of Canada’s top copyright experts: 22 delegates from 9 TPP countries turned up.

Howard Knopf, from Ottawa law firm Macera & Jarzyna,  who maintains the widely-read blog Excess Copyright, included an article aptly titled Just Say No to Term Extension—Why More is Less. He explained how term extension takes a toll on the public domain and the many stakeholders who depend upon it, without providing a countervailing benefit to authors or to the economy.

Canadian law professor Michael Geist focused on the question of ISP or intermediary liability for alleged copyright infringements committed by users. Under US law, ISPs and websites are incentivised to remove material that users upload if a claim of copyright infringement is made. But because many of those claims are false (indeed, many are made by automated systems), such a “notice-and-takedown” regime can stifle freedom of expression, as well as an infringing users’ privacy. This is what US negotiators are putting forward as a template for the TPP.

Geist presented Canada’s “notice-and-notice” regime, which does not result in automatic takedowns or threaten the cancellation of user accounts, as an alternative. Perhaps surprisingly, his presentation also suggested that a notice-and-notice regime could also be extremely effective at deterring ongoing infringement in a large majority of cases.

Reilly Yeo is from OpenMedia.ca, an internet advocacy organisation with a track record of success in mobilising ordinary users to speak out about threats to the internet in Canada, which is now reaching out to a broader constituency around the world. Reilly presented results from their Your Digital Future survey, indicating that for most of the more than 60,000 respondents, freedom of expression should be the priority value when designing copyright law.

Jeremy Malcolm and Maira Sutton from EFF formally released and presented the negotiators with two open letters, endorsed by dozens of businesses and organizations from around the world, including the Australian Privacy Foundation, Wikimedia Foundation, Reddit, Creative Commons, the International Federation of Library Associations (IFLA) and many others. The letters addressed the dangers associated with the extension of the copyright term, and of appointing ISPs as copyright police.

Pauline Westwood is a firm opponent of the TPP agreement, and a member of CLA. She has researched the agreement and its tortuous negotiation process extensively. Here she summarises two aspects from the latest abortive negotiations.