Fanning fear in society is like lighting a bushfire: you never know whose house it will burn down. Here a range of experts make pertinent comments.

Here’s what a range of commentators have had to say about the Abbott government and it’s newly declared “war” on ISIL, terrorism alert levels and bad draft legislation masquerading as a “shield” that might protect Australians from political stupidity.

A few will seek reassurance in the common illusion that one who does no wrong has nothing to fear from government. The more thoughtful reader will recall a persistent problem that emerged during the US “war on terror”. Abundant evidence from the US has made clear exactly what occurs when government personnel and their contractors fear no criminal prosecution in response to delinquent acts of physical and psychological violence.

It is likely ASIO employees and their affiliates will follow the path already forged by the Americans during their conversion to enthusiastic torturers. That way lies institutional decay, thinly masked by implausible denials issued from positions of indifferent and de jure impunity.

After receiving two legal opinions, Fairfax journalist Paul Sheehan accurately addressed the risks in a column in the Sydney Morning Herald on September 18. He also quoted Liberal Democratic Party Senator David Leyonhjelm, who summed up the matter succinctly: “Australia is engaged in a fight against barbarism, but that does not justify becoming barbarians ourselves.”

Sydney barrister Bret Walker, SC, the former independent national security legislation monitor (INSLM), said the laws were “much more trouble than they are worth”, in part because it was “unlawful” to question a person who was held under such an order.

“They are worse than useless, because you can’t question a person while they are being preventatively detained under a PDO,” Mr Walker said.

In a report in December 2011, Mr Walker said that “accidental and other criminal modes of people being killed far outnumber what has happened by terrorism”. “Should we, as a society, give consideration to … preventative detention orders against violent husbands, drunken or adolescent drivers or careless foremen? Surely not. Have we properly articulated the reasons why counterterrorism should produce an opposite response?”

George Williams, an expert in anti-terrorism laws at the University of NSW, said it was “widely assumed” PDOs (preventative detention orders) would be abolished.

He said there was no provision for PDOs in comparable jurisdictions such as the UK and the US. “Countries with a significantly greater terrorist threat don’t have this power and aren’t considering it,” Dr Williams said. “Giving the ability to lock people up – all you can say is ‘I’m safe, but can’t be contacted for the time being’ – doesn’t really seem consistent with the democracy we think we live in.”

Ben Saul, a professor of international law at the University of Sydney, said another concern was the “creeping expansion” of laws allowing people to be detained without the same safeguards or scrutiny as people held following arrest and charge.

“Fourteen days for terrorism is one thing but obviously indefinite detention of refugees on security grounds is even worse,” Dr Saul said.

The Prime Minister of Australia

Regrettably, for some time to come, Australians will have to endure more security than we are used to and more inconvenience than we would like. Regrettably, for some time to come, the delicate balance between freedom and security may have to shift. There may be more restrictions on some so that there can be more protection for others. After all, the most basic freedom of all is the freedom to walk the streets unharmed and to sleep safe in our beds at night.
(Mr Abbott and all other MPs have recently surrounded themselves, inside and outside their workplace, with federal police officers, some carrying machine rifles, as opposed to the non-armed security guards at the same posts a month ago. Mr Abbot sleeps in police barracks in Canberra, and so is doubly protected by the location as well as the 24-hour security team which surrounds him wherever he is. It would seem the Australian people are suffering the “more restrictions”, and Mr Abbott and MPs are enjoying the “more protection” – ed)

A non-publication order preventing disclosure of any information about the use of the lock-up powers means details of the order will remain secret until a New South Wales supreme court judge rules otherwise. The judge’s ruling is so broad that a supreme court spokesman says even his name cannot be reported.

NSW police, Australian federal police and ASIO officers took part in major operations across NSW and Queensland last Thursday. There were 15 people detained in the raids. One man was charged with a terrorism offence and another man was charged with an offence related to possessing a firearm.

Feeding the media
…on the ABC’s Media Watch, Paul Barry described the process via which New South Wales Police publicly announced last week’s terror raids on Twitter, lavishly documented by Police video and still photography, which was then supplied to media organisations.

As the NSW Police’s Strath Gordon told the ABC:

“Images were supplied by our multi-media team which consists of three video and one stills operator… Each was deployed with the officers in the field… The Australian Federal Police also supplied one camera and one still photographer.”

The Joint Counter Terrorism Team wishes to clarify numbers with regard to the status of Operation Appleby. In total, 16 people were detained on Thursday September 18th.

When the JCTT held a Media Conference at 9.30am, the figure was 15, but there was one further man detained later during the operation that day to bring the total to 16. This figure includes a 21 year old woman issued with a Future Court Attendance Notice and a 17 year old girl who was dealt with under the Young Offenders Act. Both women were at a Guildford address. The 21 year old will appear at Parramatta Local Court on October 17.

Ten men were subsequently released on Thursday September 18th. On Friday September 19th, three men who were subject to Preventative Detention Orders (PDO) were also released when those orders expired. 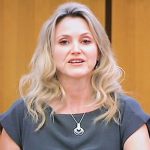 It fell to lone Labor dissenter Melissa Parke (right) … to oppose the terrorism hysteria. In a speech that will reverberate long after the present panic has evaporated, Parke began by revealing that someone on social media had “called for my execution for treason because I had questioned the government’s rapid escalation of our new involvement in Iraq.”

Parke went on to point out that “Australia has no strategic stake or status in Iraq and Syria,” and wondered, with excellent logic, why Australia was not using our seat on the UN Security Council to address these issues there.

Finally, she noted that “with the present focus on national security it is extraordinary that the Prime Minister is not attending the global summit on climate change.”

“The core issue here,” Parke concluded, “is whether the steps this government is taking at home and abroad are being properly considered and calibrated to meet the reality rather than the hype, to achieve properly defined outcomes rather than draw us into yet another counterproductive military engagement.

“That judgement cannot be made when there is no meaningful debate in the national parliament.”

Bravo Melissa Parke. If only Bill Shorten could show as much spine. http://tinyurl.com/ofbojc

If one of the intents of terrorism waged by murderous extremists is to goad Western governments into policies which erode individual liberties at home across a broad scale, then the proposed Australian metadata retention scheme, for one, appears to neatly fit into that category.

And by no means should metadata retention be conceived in isolation, since the commonwealth government has aggressively expanded the size and scope of the national security and surveillance state since at least the time of the 9/11 terror attacks.

This is reflected in the inflated budgets and staffing for relevant security agencies, and the much greater ease with which those agencies can detain suspects and obtain information, as traditional due legal processes are watered down.

– Dr Novak is Senior Fellow, Institute of Public Affairs (www.ipa.org.au). This is from her article: Metadata and the subversion of privacy The IPA is usually considered the mouthpiece of the right-wing commentariat.

Glenn Greenwald, journalist who gave the world the Snowden leaks:

“Most impressively,” Greenwald wrote today, “[Abbott] just came right out and candidly acknowledged his real purpose: to exploit the emotions surrounding the terrorist arrests to erode liberty and increase state power, telling citizens that they will die if they do not meekly acquiesce.”   http://tinyurl.com/ofbojch

It was the most worrying and wrong-headed speech by a national leader since, well, the last time we went to war under false pretences in Iraq. Tony Abbott’s national security statement to Parliament – strongly backed by Opposition Leader Bill Shorten –— takes Australia into a very dark place, and it does so based on what can only be described as lies – unless you accept that the government of Australia is profoundly ignorant.

It can only be a lie, or a reflection of an implausibly vast ignorance, to seriously maintain, as Abbott did, that Islamic State (also called ISIS or ISIL) represents any sort of “unprecedented” threat to Australia. IS is no more an unprecedented threat than it is an “existential threat”, as the Attorney-General absurdly labelled it last week.

This is a group of terrorists who are, as the FBI and the Department of Homeland Security in the United States have noted, unable to mount any terrorist operations against the US. This is a group that, in its febrile statement of yesterday calling for anyone insane or evil enough to heed its demands to attack Westerners, admitted the difficulties in organising such attacks, suggesting that if all else failed they should pick up a rock and hit someone with it, or spit in strangers’ faces. This is the group whose idea of terror in Australia isn’t 9/11or even public transport bombings but the murder of a random passer-by – although, bizarrely, at least one media outlet on the weekend was trying to claim such attacks would be somehow more damaging than a mass casualty attack.

Then again, that’s one of the iron-clad rules of the War on Terror – each threat is always hyped as somehow worse than the last one.

And it can only be a lie to insist, as Abbott and Shorten both do, that our participation in the attack on Iraq will not make the risk of terrorism in Australia greater.