‘Disguised assassin’ rallies for his innocence

This is the second book by Tom Mann on serious wrongful convictions in South Australia. The first was the story of Edward Splatt, convicted of murder and subsequently granted a pardon after a Royal Commission found that all of the forensic evidence in the case was substantially flawed. 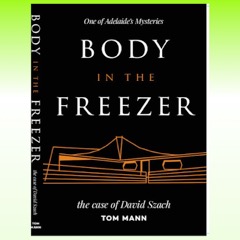 In this book, Mann deals with an even more intriguing case. It involves the assassination of a high profile criminal lawyer, and the alleged wrongful conviction of his young partner for the murder.

It is set against a background of drugs, sex and the homophobia which was undoubtedly part of the reaction to gay relationships in the 1970s. Adelaide was the town in which a young law lecturer had been drowned a few years earlier after he was thrown into the river near the law faculty at which he worked. Although it was thought that police officers had been involved in the incident, subsequent attempts to convict them were unsuccessful.

So, one day in 1979, Derrance Stevenson failed to turn up to court. The police are asked to investigate and a short time later they find his body in the freezer at his home-office. He had been killed by a single shot to the back of the head. It had all the signs of a professional hit. Cold, calculated…and with everything done to confuse the investigation.

Remarkably, the pathologist who is assigned to the case subsequently claims to be able to determine a reasonably precise time of death, which just happens to coincide with a witness who saw Stevenson’s young boyfriend at the premises around that time. As the prosecutor said, ‘the objective and scientific evidence means that he was dead by 6.40, and the accused was there.’ If true, there can be only one explanation. The jury accepted that explanation and convicted David Szach of the murder.

However, once Tom Mann begins to set out the detailed evidence surrounding the case, the clarity and confidence in the verdict cannot be maintained. It is now clear that the forensic evidence relating to the time of death was unreliable. It is also clear that the person who gave that evidence, Dr Colin Manock, has been discredited. His evidence in the case of Henry Keogh was recently determined by the Court of Appeal to amount to no more than unwarranted and prejudicial speculation.

David Szach has professed his innocence in this matter for over 35 years. He refused to apply for parole. Eventually the government of South Australia passed special legislation to allow the head of the parole board to make the application on his behalf. It was hardly surprising then that the board granted his parole and David was unceremoniously bundled out of the Adelaide prison in an attempt to avoid further embarrassment.

The timing of the publication of this book has been well-planned. It comes after South Australia introduced new laws in 2013 to grant a person claiming to have been wrongly convicted a right of direct access to the courts for a further appeal.

When Szach applied for legal aid to exercise that right, he was refused. It seems that such funding is only available for those at risk of going to prison. David had long since finished his sentence.

However, David is nothing if not determined. Despite the fact that he has been suffering from motor-neurone disease, he has been a skilled and persistent advocate in his own cause. He has collated materials, and worked with media outlets in his attempt to inform the public, not just of his own case but of the serious systemic errors which have occurred in the criminal justice system in South Australia.

Anyone reading this book by Tom Mann will marvel that it has not as yet been made into a feature film. Perhaps, after the next few months, it will be. David has now secured the assistance of Australia’s largest class-action law firm – Maurice Blackburn – to present his case for a further appeal. I would encourage any journalist, or other interested people, who will be covering or following the appeal to obtain a copy of Mann’s book. It will provide essential reading for what is to come.

The Crown’s case is that David, with no history of violence or criminality of any description, spontaneously and without reason decided to murder the one person who had shown him some love and kindness. Whatever you may think of a lawyer in his forties developing an intimate relationship with a young boy in his teens, the two of them had been in a stable relationship for some years.

According to the Crown case, the young David shot Stevenson in the back of his head using a pillow to muffle the sound. He then, without assistance, folded the body up and placed it in a freezer. He remembered to put super-glue around the lid of the freezer before closing it. He then cleaned up the scene. Later that evening he called a taxi to the premises, and then left in the taxi wearing a raincoat and glasses somewhat similar to those sometimes worn by Derrance.

The Crown says that later that evening he left town in Derrance’s sports car and drove hundreds of kilometres, during the night, to Coober Pedy. In those days, in the late 1970s, parts of the road were no more than a rough and winding dirt track. He apparently covered the distance in a time which would have exceeded the abilities of skilled rally drivers.

The following morning a young man turned up at the legal advice centre in Adelaide. He was looking for a lawyer to help him. In speaking to the receptionist, he mentioned that Derrance Stevenson had helped him in the past but, he intimated, when he left him the previous evening ‘he was in no condition to act for anyone’. The young man was never seen or heard of again.

There is a clear possibility that the young man may have been the victim of what became known as the ‘family murders’ in Adelaide.  The killers of Stevenson may have got to him before he could tell what he’d seen. The family murders were a series of killings involving young men, homosexuals, and the bizarre mutilations of bodies which involved some degree of surgical skills or medical knowledge. Murders, which to this day, remain largely unsolved. They took place within a short time after the Stevenson murder.

The history of wrongful convictions is littered with cases involving tunnel vision. Police and prosecutors are sometimes keen to reassure the public that things are under control, especially when particularly horrific murders have occurred. Sometimes, the most obvious suspect turns out to be the wrong suspect.

It is interesting to note that the prosecutor in the Szach case, many years later, sat as the judge in the trial of Lloyd Rayney, the barrister in Western Australia accused of the murder of his wife. The judge said that a careful analysis of the time line of the known occurrences on the evening Mrs Rayney died was not consistent with the Crown case. In Tom Mann’s analysis of the Stevenson case, he makes out a very similar argument concerning the time line of the various actions which had taken place on the evening Stevenson was killed. In retrospect, it seems that Szach, without any training, would have had to combine the skills of a trained assassin, a master of disguise and a highly skilled rally driver to achieve what on Mann’s view would still have been impossible.

Fortunately for us, the deficiencies in this case will not be left hanging for much longer. Following hard on the 2015-16 heels of the overturning of the Keogh conviction after 20 years imprisonment will be the further appeals in another two notorious South Australian cases: Frits Van Beelen convicted of the murder of a young girl in the early 1970s, and Derek Bromley, convicted in 1984 of the murder of a young man by throwing him into the River Torrens. This was the same river where law lecturer Dr George Duncan had been killed by being thrown in some 12 years earlier.

Along with those cases will be the appeal for David Szach. Having read Tom Mann’s book, I would be very surprised if it is not determined that Mr Szach has been the victim of a ‘substantial miscarriage of justice’. Hopefully, that will re-awaken some desire on the part of the police in South Australia to identify and apprehend those who were truly responsible for this horrific and audacious crime.

Body in the Freezer: the case of David Szach, by Tom Mann, Griffin Press (2015)

*  Dr Bob Moles ACII (UK) LLB (Hons) (Belfast), PhD (Edinburgh), Networked Knowledge, was previously Associate Professor in Law at Adelaide University, Senior Lecturer in Law at the Australian National University and Lecturer in Law and Jurisprudence at Queen’s University, Belfast.  Dr Moles was prime mover in the campaign which produced the new ‘Right To Appeal’ ;aw in South Australia in 2013 which is permitting the new appeals shining light into the dark crevises of a state’s ‘justice’ system gone feral.