The federal government has set a 1 October 2017 deadline for 7500 people who arrived in Australia by boat between 2008 and 2013 – but who have not yet lodged claims for refugee protection – to apply for a visa or face deportation.

Immigration Minister Peter Dutton declared “the game is up” for “fake refugees”.

“The Turnbull government has today set a deadline for thousands of Illegal Maritime Arrivals (IMAs) who flooded into Australia under the previous Labor government to prove they are genuine refugees and owed protection by Australia.” 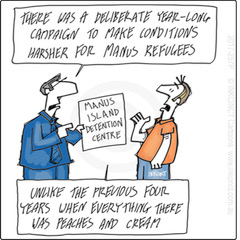 This statement reinforces prejudicial tropes that successive governments have used to demonise people seeking asylum in Australia. The subjects of the government’s announcement are not “people”, “individuals”, “human beings” – or even “asylum seekers”. Instead, they are “illegal maritime arrivals”.

These seemingly non-people did not “travel to” or “arrive in” Australia. Instead, they “flooded into Australia”.

They are the latest group to suffer from the shameful practice of setting human beings apart from others in the community: they are another class threatening peril and menace.

Dutton’s condemnation of “fake refugees” is prejudicial. It suggests those people now subject to his deadline must not have genuine protection claims – or they would have been lodged already.

Yet Department of Immigration statistics show people who travel to Australia by boat without a valid visa, seeking asylum, are more likely to be genuine refugees than people who travel by air with a visa and seek asylum on arrival. Over the years, between 70% and 100% of people arriving by boat have been assessed as eligible for refugee protection.

For example, people from Afghanistan have been the most likely to seek asylum in Australia by boat for many years. In this group, between 2008 and 2013, upwards of 95% were found to be refugees and granted protection visas.

Lodging an application for protection

The people subject to Dutton’s announcement are part of a group known as the “legacy caseload”. These are people who have been living for some time in the Australian community in a state of legal limbo.

Dutton’s assertion that the 7500 people now faced with a very short deadline for application have “failed or refused” to apply for protection unfairly suggests that sufficient time has already been afforded.

The prejudicial effect of this claim is worsened by Dutton’s parallel statement that the people in question are a drain on the public purse:

Many are residing in Australia on government funded support which last year cost the Australian taxpayer approximately $250 million in income support alone.

Dutton’s announcement also fails to mention that the Department of Immigration is unable to process the volume of asylum claims currently lodged, or that an arbitrary deadline for applications from people in the legacy caseload group will force many to apply without proper legal assistance.

Community legal centres around Australia have thousands of clients on their books awaiting assistance with protection claims. The complex process requires the completion of 184 questions and a detailed written statement, and many applicants will require translation. All ought to receive legal advice.

The latest development imposes undue stress on an already extremely vulnerable community. Only three months ago, some members of this group received letters from the Department of Immigration, threatening the withdrawal of Medicare and work rights if they failed to lodge applications within a tight deadline.

That many – if not all – of this group were on waiting lists for legal assistance is seemingly no longer sufficient to explain why they have not yet lodged protection applications.

The ABC’s Jane Norman reported from Senate Estimates hearings on 23 May 2017:

Is Australia committed to human rights or not?

… we are arguably the most successful, the most diverse, multicultural society on Earth.

We have long embraced those fleeing conflict and persecution, and those in need of humanitarian support.

If elected to serve on the council, Australia intends to work collaboratively with all of our international partners towards fulfilling the goals set out in the UN Declaration of Human Rights – we will listen to your concerns. We will work with you.

It is impossible to determine the genuine extent of Australia’s commitment to human rights by juxtaposing Bishop’s claims with Dutton’s announcement. Article 14 of the Universal Declaration of Human Rights requires Australia to protect the rights of all people seeking asylum:

Everyone has the right to seek and to enjoy in other countries asylum from persecution.

Article 33 of the UN Refugee Convention prohibits the return of a refugee to a risk of persecution:

No contracting state shall expel or return (“refouler”) a refugee in any manner whatsoever to the frontiers of territories where his life or freedom would be threatened on account of his race, religion, nationality, membership of a particular social group or political opinion.

Yet the imposition of the October 1 deadline for applications from those in the legacy caseload group imposes an arbitrary limit on the time available to seek protection. It suggests the government is willing to violate its international legal option not to deport people who may have genuine claims for refugee status.

Refugee advocates will feel compelled to challenge the deadline in the courts, if the government seeks to deport people who have not had adequate opportunity or support to complete protection applications. This would open yet another front of government spending to support a policy and practice that violates Australia’s human rights obligations.

Amy Maguire is Senior Lecturer in International Law and Human Rights, University of Newcastle, and Indigenous Student Liaison Officer. She is is a member of the National Committee of Australian Lawyers for Human Rights and a member of Amnesty International. This article first appeared on The Conversation http://tinyurl.com/l85brrs