‘Out of the Madhouse – from asylums to caring community’, Authors: Sandy Jeffs and Margaret Leggatt

This book documents the history of the mental asylum (Sandy’s word) ‘Larundel’, which operated in Bundoora, a northern suburb of Melbourne, from 1954 to 1999, and the mental health facilities which have been put in place since Larundel closed.

Jeffs is a schizophrenic who spent many periods as an inmate (Sandy’s word) of Larundel. She now lives in the Yarra Valley as a noted poet and author. Leggatt is a sociologist and occupational therapist who worked in Larundel and since its closure has initiated many facilities for the mentally ill.

In researching for the book Sandy interviewed 71 people: former inmates, psychiatrists, psychiatric nurses, social workers and others. Many have allowed their names to be used, some have not, still burdened with the fear of the stigma of mental illness and association with Larundel. 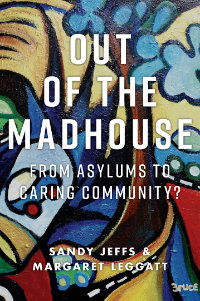 Sandy says that she has included “The good, The bad and The ugly” of Larundel. She documents all of them.

Some of the good were the beautiful gardens and grounds, which were therapeutic in themselves, where inmates could idle their time sharing a cigarette and a chat sometimes with the staff, and the facility for deeply disturbed people to stay for months or longer and gain control of their demons.

The bad included the notorious over-dosing of drugs and stays which extended into years, leading to some inmates becoming institutionalised.

The ugly included the worst of the treatments such as the now totally discredited “Insulin Coma Therapy”(ICT) where inmates were rendered comatose with massive injections of insulin, leading in some cases to death. There was also the production line administration of ElectroConvulsive Therapy (ECT) with traumatising affects in inmates, and the infliction of seclusion sometimes as a punishment or to induce compliance.

In the later part of the book Sandy and Maggie document the failings of what has been provided for the mentally ill since the closing of Larundel:

Maggie also writes of initiatives which she has been involved in, but most have fallen by the wayside.

This is an important book because it documents a past era with its good and bad and the severe failings of the present-day system.

It is also important because it is largely written by a high functioning schizophrenic who still lives with the daily demons of that most stigmatised of mental illnesses and is a clear demonstration that such people can live highly productive lives in the community.

I commend the book to all those who have an interest in mental health, its issues and treatment.