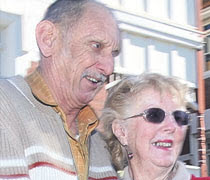 Parliament rejected his bid for justice 47 years ago. He served 15 years for a crime he didn’t commit. His conviction was quashed six years ago…but in 2011 the WA Government has still not compensated Darryl Beamish for the courts, the politicians and the state failing him close to half a century ago.
PHOTO: Darryl & Barbara Beamish, courtesy of Post Newspapers

Sir: I welcome the report by the editor of the Subiaco Post, Brett Christian, on compensation for Darryl Beamish (Post, 29 Jan 2011, p3, p75).

Payment of $3.3 million to injured police officer Matthew Butcher has brought new calls from a man wrongfully convicted of a Claremont murder for an answer on his claim.

Darryl Beamish (70), profoundly deaf since birth, has asked for $500,000 as an ex gratia payment for the 15 years he spent in jail for a murder he did not commit.

He applied for the payment in July 2009, but his lawyer Michael Dawson has had only an acknowledgement to his letter, despite follow-up letters.

In Mr Christian’s report Mr Beamish has received no compensation for 15 years spent in jail. His conviction was quashed by the Supreme Court in 2005, when evidence was produced pointing to serial killer Eric Edgar Cooke as Ms Brewer’s killer.

I support the modest request by his legal representative for $500,000 as an ex-gratia payment, because Mr Beamish has suffered a Supreme Court trial where he was convicted of wilful murder and sentenced to death, later commuted to life imprisonment, of which he served 15 years.

I would like to draw Post readers to the Hansard of the Legislative Assembly, Wednesday 21 Oct 1964, where the WA Parliament had access to Cooke’s affidavit and much more material in support of Darryl Beamish’s innocence, in my opinion. There were two motions before the House, one for a new trial and the deferment of Eric Cooke’s execution. The leader of the opposition, Mr Hawke at that time, wanted to send Cooke’s affidavit ,with other supporting material, directly to a judge and jury. The opposition told the House that, if this motion was carried, there was no doubt the jury would acquit Darryl Beamish unanimously. By deferring Cooke’s execution, his affidavit could be vigorously tested before a judge and jury.

Unfortunately the Legislative Assembly rejected the motions by a majority of 21-20, and Beamish was denied the right to a fair trial which undoubtedly would have resulted in his acquittal at that time, and Cooke being able to testify in person that he murdered Ms Brewer.

If one reads the Hansard p1762-1798, you’ll see clearly that there was huge doubt about Beamish’s conviction for wilful murder. The Legislative Assembly seemed to be hell-bent on upholding the status quo, protecting the integrity and credibility of the three judges who rejected Cooke’s affidavit in the court of Criminal Appeal. Amazingly, the former Chief justice, Wolf, who was the trial judge, was also one of the applicant judges of the appeal.

The Legislative Assembly by majority of one vote, at 12.35am on 22 October 1964 was responsible for denying this totally innocent person the right of a fair trial, and costing him his liberty.

He not only deserves the acquittal, but in my opinion he deserves an apology with the requested compensation. Historically, the Darryl Beamish case strongly supports the abolishment of capital punishment.

PS: Eric Edgar Cooke was executed, by hanging, the following Monday, 26 October 1964. He was the last person hanged in WA.