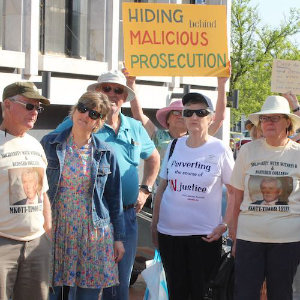 Barrister and former ACT AG Bernard Collaery said Australia was going through “sad times” in what has become a “fragile democracy”.

He handed a statement to reporters as they and the public were shut out of a court case in the ACT Supreme Court by judge David Mossop in late May 2020. The judge was obeying instructions from the federal Attorney-General Christian Porter to hold a trial in secret, again.

“I am unable to say much and you are unable to report much. This is the state of our now fragile democracy. I hope that there will be a royal commission in my lifetime,” Collaery said.

He and ‘Witness K’, a former ASIS agent, are paired in a downward spiral of blatant abuse of the law for political ends caused by the federal AG prosecuting the wrong people for events around the bugging of the Timor Leste cabinet rooms by Australia in 2004.

The bugging was to secure commercial advantage in oil and gas negotiations for Australia over Timor Leste, a deal which would also benefit the oily-gassy corporate entity, the bloated Woodside. Australia’s then-Foreign Minister Alexander Downer went on to work for Woodside soon after he retired from politics.

Such sweetheart posts were common practice back then: now there’s a supposed restriction on ex-Ministers working for corporates who have benefited from Australian government decisions. Though there’s no evidence the curb is working, as the post-retirement board role of the most recent Foreign Minister, Julie Bishop, indicates.

Back in the early 2000s, the Australian listening devices revealed Timor-Leste’s bottom line, its negotiating tactics and the competing views of cabinet members, as the Guardian’s Christopher Knaus has explained. https://tinyurl.com/y93nfhch

Instead of finding a suitable criminal clause to use to charge the 2004 Prime Minister John Howard, Downer and Australian officials for bugging that was amoral and unethical and against fair go international practice, AG Porter decided to prosecute the two people who were prepared to help Timor Leste mount a case against Australia’s improper tactics.

Ultimately, the tiny, poor country won. The twisted earlier deal, ASISted unfairly to Australia’s advantage, was overturned. TL got rights to its proper share of the oil and gas riches under its sea area.

Witness K has pleaded guilty to sharing protected ASIS information. He awaits his day in sentencing court for what CLA believes is a non-crime in the context. We may never know what happens to him: the similarly-named Witness J was tried, convicted, sentenced and jailed in secret under similar instructions from AG Porter.

Collaery’s situation is much more complex. He was given official government permission to act as Witness K’s lawyer in proceedings against the government. Collaery was also a lawyer for Timor Leste.

Porter’s predecessor as AG, George Brandis, refused to prosecute the pair, which is why it has taken about 15 years from the initial and official government bastardry for the matter to have its day in a closed court.

Who is on trial?

Whatever happens, the judgement of AG Porter is as much on trial – at least in the public eye – as are the legal death spiral pair of K and Collaery.

Porter will not be able to keep secret the disappearance of K and Collaery into any federal Australian gulag. The number of eyeballs keeping watch on Porter’s excesses is growing daily.

He is the minister in charge of the supposed integrity commission with teeth we desperately need but which he is likely to deliver as a gummy shark.

As well as being AG, he is also Australia’s industrial relations minister, who was appointed to that role when the Prime Minister Scott Morrison intended a vindictive approach towards trade unions by adopting pret-a-porter laws against their officials and customary practices.

Minister Porter has just been given responsibility for bringing together unions, employers and workers to effect a massive recovery from the depths of the Covid-19 commercial disaster. To achieve that miracle, Porter will need to change his spots.

He could demonstrate he is starting to do so by ending the legal farce that is the court case against Collaery. It is entirely within his power to withdraw his original permission which was necessary for the case to start.

That would start to lift Australia out of these “sad times”.