Bill Rowlings* questions how ‘professional’ is the Legal Profession Board of Tasmania. It’s a quango that only recently worked out it needs to abide by model litigant principles, a decade after it was created. And it seems to particularly dislike the right of people to question, scrutinise and dissent.

Barbara Etter** is a lawyer who has been contesting complaints against her that are being investigated by the Legal Profession Board.

It is a body which annually seeks funding approval from the Attorney-General and reports formally to the AG each year, making it a quango despite its claims of “independence”. It has 10 statutory functions. Handling complaints is the third listed, but seems to dominate its activities overwhelmingly. Educating the public is one of its activities which appears to have received a very much lower priority.

The first LPB complaint against Etter concerns her comments on the TV program 60 Minutes in 2014 about the evidence introduced at the Sue Neill-Fraser trial (SNF) by the Crown concerning the presence (or otherwise) of blood in the dinghy of the yacht from which SNF’s husband disappeared.

Background: Barbara Etter was SNF’s pro bono lawyer for about five years, after the original trial and appeal to the Tasmanian Supreme Court were long done and dusted. By then, SNF had been sentenced to 23 years jail, with 13 years as the non-parole period, for murdering her husband, Bob Chappell in 2009 (his body has never been found, nor has a murder weapon – that’s another idiosyncratic Tasmanian story). In May 2017, Etter stepped aside from the legal team for the second appeal case, for private reasons not yet explained publicly (nor to me). SNF’s bid for a new hearing with another pro bono legal team is continuing to drag on and out. The SNF bid for a second appeal is now before the Tasmanian Supreme Court, but only at the preparation-for-hearing stage. Now read on…

By one of those serendipitous coincidences, the Supreme Court determining SNF’s application for a new appeal was hearing evidence from an eminent forensic scientist, Dr Mark Reynolds APM, on the same day that Etter’s own appeal over legal technicalities relating to the LPB was being heard in an adjacent Supreme Court room. 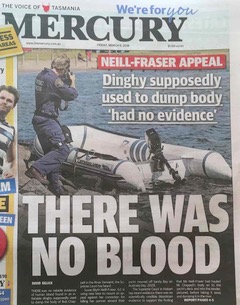 Among other topics, Reynolds gave evidence the effect of which was summarised on Page 1 of The Mercury on 9 March 2018 –  ‘There was no blood”’– and on pages 4 and 5 as ‘No human blood’. This is one of the key points that Etter has been making since 2014 and for which it is claimed that she brought justice in Tasmania into disrepute. (See ‘Is Etter qualified…?, below).

Also on page 4 is an extended article reporting on Etter’s success that same day before the Full Court (a bench of three Supreme Court judges) in having her right to practise law reinstated pending the outcome of a full hearing before a Full Court, which is likely to be in the last week of May.

Her licence to practise law was suspended in October 2017 by order of the Legal Profession Board, who claimed then, and still claim, that she was obligated to hand over to them her entire client file – both hard copy and electronic – covering the three-year period when she acted for a client on a protracted inquest matter (another possible miscarriage case, which is quite separate from the SNF case).

Etter has always claimed that she had “reasonable excuses” (that is the phrase in the legislation) to not hand over the requested file.

Of relevance to Australians interested in civil liberties is that, at least in Tasmania, it is possible to suspend a lawyer’s practising rights even when no disciplinary allegations or charges have been formally laid against him/her.

What is more, that suspension – entailing cutting off a person’s income, loss of clients, and loss of reputation – can continue for over four months with nobody other than the affected practitioner thinking that this may not be a good look for the profession.

** Is Etter qualified to comment on forensic and legal matters?

Etter was the inaugural CEO of the Tasmanian Integrity Commission (therein lies another devilish Tasmanian story).

Earlier in her career, Etter topped her course at the NSW Police College and, after NSW Police, served as a commander in the NT Police and with WA Police also. In WA, she rose to assistant commissioner and was at various times in charge of Strategy and Performance, Corruption Prevention and Investigation, Traffic and Operations (including specialist support such as Forensic, Communications, Prosecutions, etc.) and Professional Development (including the WA Police Academy). She also acted as Deputy Commissioner in WA on a number of occasions.

Nationally, she was Director of the then Australasian Centre for Policing Research in Adelaide. She is the recipient of an Australian Police Medal (APM, the police equivalent of an OAM).

From my obviously fruit fly-affected, mainland viewpoint, it would appear that raising doubts about whether the local legal system has possibly produced miscarriages of justice is not encouraged in Tasmania.

It seems that establishment figures like sleeping dogs to lie. The powers-that-be believe ‘cold case’ re-investigations might turn out to be foxes in sheep’s clothing which could bite them on the bum (Tasmania has suffered from alleged fox poo sightings in recent years, on an island supposed free of vulpes skulks).

Nobody in Tasmania has Etter’s academic and practical knowledge as well as diverse and hands-on experience of delivering “justice” broadly defined. But, like many others before her who have moved to management roles in Tasmania, she has felt the wrath of some CrabApple Isle ‘birthers’, who appear to prefer wilting mediocrity to letting 100 flowers bloom (well, 4 or 5, maybe).

Is Tasmanian justice greater or lesser than that of the other states and territories of Australia? You be the judge. But you would think a legal and police system that was proud of its excellence and confident in its performance would be openly transparent to its citizens, welcoming scrutiny, because there would be nothing to hide.

By its consistent behavior over a number of years, the Tasmanian establishment could have much to hide. Any time a governance system responsible for law and order closes down on itself, citizens have a right to be alarmed. The way the state has handled the second SNF appeal should be the subject of a public inquiry.

The LPB, a relatively new body (2007), claims in its annual report that it “seeks to maintain a complaints handling process which is as good as or better than any other in the nation”.  Any profession’s system should be based on a fair go for all parties, the legal profession’s more than any other, you would think.

The LPB, by its own admission, hasn’t been an exemplary entity for most of its 10-year existence. It has not operated to model litigant guidelines. Its latest (2016-17) annual report says:

The Board, in an effort to continually strive for excellence in all of its endeavours, has been working toward the development of a ‘model litigant policy’. The purpose of the policy will be to ensure that the Board and all of its officers adopt the highest of standards when undertaking litigation in relation to disciplinary matters. It is expected that the ‘model litigant policy’ together with the supporting guidelines will be formally adopted by October 2017.”

That’s precisely the same month it was suspending Etter’s practising rights ex parte, as the lawyers say (basically, without her being present at a hearing and having the opportunity to put a case). It’s a pity the Tasmanian government and the directors have permitted its own “legal” board to operate unguided by model litigant principles for most of its existence.

Note: “Model litigant rules, or model litigant obligations, are guidelines for how a government body ought to behave before, during, and after litigation with another government body, a private company, or an individual…It is vital that government bodies should not be ‘out to get’ people, but should be acting in the public interest, according to law.” – Rule of Law Institute of Australia.

The Indian Supreme Court (the equivalent of Australia’s High Court) said in August 2017:

In Hyderabad, but not in Hobart, it would seem.