Election in the offing: law ’n order pollies get desperate. Both major parties want new ‘frighten the citizens laws’, reducing people’s rights, increasing secret surveillance, giving police yet more powers. Pollies pretend the ill-thought-through laws will reduce crime. More likely crime will increase. Stand by for other ghastly laws from the skeleton hands of Premier Perrottet and Pals of the NSW parliamentary ghost train, where scare the punters trumps care for the citizens.

Read full article
The federal grovernment is trying to stop protest against activities like fracking, geneically-modified crops and animal cruelty (among others) by a third-party, ’thought police’ approach to making charities responsible for activitie about which they are unaware and over people aover whom they have no control. Welcome to the world of political ideology gone rampant, as Paul Gregoire reports.
Read full article 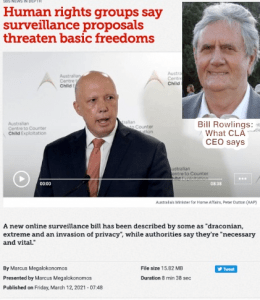 Under Home Affairs Minister Dutton, the government’s security laws are getting harsher, the crackdown harder; privacy and rights are shrinking as freedoms dwindle.
Read full article

The ACT is about to get updated whistleblower laws…but are the changes enough? ANU law students from the social justice stream examine how naked a ‘ whistler’ can seem to become when all the supposed safety shields are stripped away from him, or her.

It’s useful to review old critiques when new ones emerge, particularly to see if time has changed what’s important. Here’s a 2017 paper on integrity bodies. It suggests that, to secure funding against a recalcitrant Executive government, there should be a “special branch” of integrity agencies that get rum and rations directly from Parliament. What a good idea! Bring on a national ICAC with teeth.

Read full article
Civil Liberties Australia has called on the federal– and state/territory – parliaments to hold more sittings during an emergency, not fewer. They should also to set up e-communications and decision making in advance, and hold regular practice sessions.
Read full article