The 2014 budget was of the ‘law and order’ variety, not the ‘rule of law’ variety where human rights and civil liberties receive balanced and equal treatment. Lean years ahead!

The Australian Government has slashed funds for human rights education and legal aid, but boosted handouts to instal CCTV cameras and – for some inexplicable reason – create a “national” anti-gang squad in WA only. 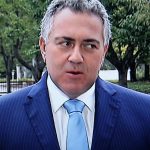 The measures are contained in budget statements from Treasurer Joe Hockey (left) that also remove independent monitoring of security legislation by cutting off its funding.

The biggest change of all comes in what appears from the outside to be a boring area of boards and tribunals. But the bodies concerned are of real, fundamental, everyday importance to a whole range of individuals Australians and would-be Australians.

All “merit review” – that is, appeal – tribunals are being amalgamated. The one body, SuperTrib, will be the over-arching appeal tribunal covering the old Administrative Appeals, Social Security, Refugee Review, Migration Review and the Classification (censorship) Board.

The government hasn’t said how much this will save. In fact, the proposal is so rawly developed that the government doesn’t know how it will work. Here is what it says:

“Details of the new arrangements will be developed in consultation with key stakeholders.”

Yeah, pull the other one: the overwhelming majority of “key stakeholders” for the Refugee and Migration Review bodies are refugee claimants. Can you see Minister Scott Morrison seeking advice from refugees about how he should run their review tribunals?

From July 2014, the government will make a Human Rights Commissioner do double duty, by having an existing commissioner take on a dual appointment instead of appointing a replacement. The government hasn’t said which human rights area is to be halved in importance…but they have said it will save $1.7m over four years, or a pittance per annum in national budget terms.

Similarly, they are “ceasing” the Commonwealth Human Rights Education Program, to save another $1.8m. It is not sure where Australians, particularly children, will learn about human rights in future, but it certainly will not be from this government.

Legal aid is also being wound back: it is not possible to explain this in a better way than the way the government’s own double-speak puts it:

“The Government will achieve savings of $15.0 million in 2014‑15 by partially reducing funding to legal aid commissions as announced in the 2013‑14 Budget measure titled Legal assistance — expansion of funding.”

The comment belies belief, and proves that Double-Speak, not English, is the first language of the Abbott government.

But there’s no-one left to hold government to account for its sins of language and callousness towards human rights and civil liberties matters. For example, the watchdog on transparency in government, the Office of the Australian Information Commissioner, is having $34m in funding cut over the next four years. So who will “keep the bastards honest”. Where’s Don Chipp when you need him? 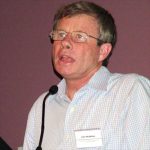 The Information Commissioner, Prof John McMillan (right), must have offended someone high up in the government big time. He was already crying paucity of resources under the previous Labor government, and his influence and output will be emasculated under the new regime.

He loses Privacy entirely, which becomes a new Commissioner position – probably a half-baked one, see above – under the Australian Human Rights Commission.

In complicated duck shoving, reviewing of Freedom Of Information decisions goes to the Administrative Affairs Tribunal, with handling of FOI “combined” with the the Commonwealth Ombudsman. The Attorney-General’s Department gets to boss everyone around, by being put in charge of issuing FOI guidelines, collecting statistics and reporting to parliament on the FOI act. Putting AG’s in charge effectively “kills” FOI, because AG’s has a very poor track record on the weight and importance it gives to areas like human rights and transparency – just look at its part in doing a deal over East Timor’s oil and gas field, for starters. That’s where we bugged the other side while negotiating with them.

In a case of fiscal legerdemain, the government is abolishing the position and function of the Independent National Security Legislation Monitor by simply not funding it. The Senate has already warned it would not pass the government’s bill to abolish the position, held by Bret Walker SC, the Sydney barrister, since April 2011. So the government is using its fiscal power to achieve its legislative aim: that’s one way to skin a cat who was the only cat keeping a close eye on the excesses of Labor and Liberal governments over spook legislation.

Walker (left) had done and was doing a good job. His equivalent in the UK has been fundamentally important in keeping the British parliament from legislative excess over security laws.

Now the Abbott government, and Attorney-General Senator George Brandis, will be able to legislate witless to ramp up fear over security, and to create an even greater police state…if that is their bent., and every G20 or similarly numerically-designated international meeting in Australia seems to call for brand new, expanded laws so that the police and spooks don’t end up with egg on their faces, or Chaser promo footage on the nightly news.

By the way, the saving is $300,000 a year. In other words, the government has just disclosed how much Walker was being paid for his Monitor role. So much for privacy.

There’s one loss that Civil Liberties Australia applauds. The Council of Australian Governments Reform Council is getting the chop. Thank goodness. It was useless, and merely duplicated work that didn’t need doing in the first place. The saving will be $8.3m over four years…abolishing the body will even save the states and territories about $10m in total over the same period.

There’s a small raft of extra funding, allocated to do the most politically.

Some of the extra, $61m, will come from the government’s Brown Paper Bag slush fund, officially known as the Confiscated Assets Account[1], into which money pours under the draconian Proceeds of Crime Act 2002. That act, which makes people account with receipts for every last item they own, is designed to pump money from the Mr Bigs[2] of crime into the Attorney-General’s Department slush bucket. In other words, the very agency prosecuting you profits from doing so…which is suss to say the least, and should not pass a propriety test. A similar interests test in the states and territories should disbar the public prosecutor’s office from benefiting by way of the funds they receive as awards in court.

There’s $50m over four years for the Safer Streets Program…which funds CCTV and better lighting in urban centres. But this is just a re-announced, pre-existing program (called Safer Suburbs) which the Rudd and Gillard governments also ran, with the funding fudged. If you add the supposed $50m here, and the $10.2m for the “National” Anti-Gang Squad, you come very close to the $61m which will be filched from the Brown Paper Bag fund.

In other words, the government is playing a pea-and-thimble trick.

The “National” Anti-Gang Squad continues the double-speak: it’s not “national” at all, but will operate only in Western Australia. Even the budget papers give the lie away:

“The Government will provide $10.2m over three years from 2014-15 for the Australian Federal Police to establish a dedicated Western Australian Anti-Gangs Squad to fight organised crime at the local level…This measure will be funded from the Consfiscated Assets Account.” (ie, the Brown Paper Bag slush fund).

Money spent in 14-15 in local communities is likely to provide opportunities for federal MPs to “open” CCTV set-ups and inner-city lighting schemes for about 12 months in 15-16 in the lead-up to the next election, so that local newspapers will be full of Abbott government largesse stories.

There’s also $18m over three years for a Schools Security Program: similarly, it kicks off in 2014-15.

What needs close watching with this type of expenditure is whether it is disproportionately placed in electorates of greater import to the Liberal-National Coalition parties: those of us with long memories for such pork-barrelling by parliamentarians remember Labor’s Ros Kelly and the Whiteboard scandal. Younger people can look Kelly/Whiteboard up via Google. The aftermath of that scandal was that the federal seat of Canberra fell briefly, for a year, to the Liberal party.

The government is nodding its hat in the direction of “Enhancing Online Safety for Children” with a total of $10m over the next four years. If kids’ web safety is important to the government, allocating $100,000 total over four years “to support Australian-based research and information campaigns on online safety” does not cut the mustard: that’s $25,000 a year to find out what’s going on, and to educate kids.

There is apparently to be an Office of the Children’s e-Safety Commissioner, costing about $600,000 a year for Commissioner, staff and premises. Such positions are very useful for governments for, at little expense, they provide someone to take the blame if/when something goes wrong.

If the 2014 budget is anything to go by, civil liberties and human rights are in for a few lean years.

[1] The governmnent says: “Expenditure from the CAA will be used to fund crime prevention initiatives. This measure delivers on the Government’s election commitment”.

[2] It usually corrals the Mr Littles, and sometimes the Mr Mediums…but never the Mr Bigs of crime.