By a special correspondent 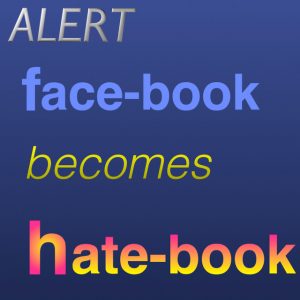 For months before the last federal election in 2016 I was immobilised after surgery and had lots of time on my hands. I began using Facebook (FB), an important, but not the only, means of online communication known as “social media”.

I am writing this short article with people like myself in mind after discussions with some people over a pleasant summertime lunch. People who grew up to value privacy, civil liberties, strong democratic traditions and, in many cases, whose fathers battled fascism in WWII.

So if you are young and reading this forgive my recital of the obvious. Largely, this is for people who don’t know much about FB.

With FB one can accept the “settings” as is, or spend considerable time adjusting for “privacy”. I was surprised at the extent to which many FB “friends” accepted the stock standard settings and exposed themselves (and their FB friends) to open public scrutiny.

I adjusted my settings to ensure maximum privacy and decided early on not to post any personal information or photographs.

What I had to accept in signing up were the most onerous terms giving FB access to my personal details arising from my use of the facility.

”Big Brother” fears of government intrusion into personal life pale in comparison to what we give away to Mark Zuckerberg, FB CEO – and of course any police, security or spy agencies, domestic or foreign, gaining legal or illegal access to the data. FB knows everything. When it’s in use, for how long, what one reads, ones reaction to posts by others and any comment.

If ever our democracy falls to despotism it will be FB and its like that facilitate the round up and internment of dissidents. (But then if you write to newspapers about public issues of controversy or belong to a political party or activist group I guess you are within the sights anyway).

FB has some wonderful features. One can “save” articles for future reading or reference. Post photographs or short videos of public events or demonstrations. Attach You Tube songs to express opinions or just share the joy of music. Be reminded of people’s birthdays.

In the main I made friends on FB with people and colleagues I know in real life. Some friends used the service to engage others with aspects of their real lives – holiday travels, bushwalks, exercise sessions, meals, restaurants and family events. Many however suited me perfectly. They posted articles of interest to me about politics sourced from wide and diverse writers and publishers. I revelled in the free and ready access to news and opinion. I ignored the ads, trending news feeds and suggested posts.

A couple of weeks into my FB wonderment I ventured beyond my friends’ pages and decided to look at Senator Cory Bernardi’s FB page. I was gobsmacked at the raw and inflammatory reactionary articles posted by Bernardi. But what was even more arresting was the “comments” made by those who read his posts.

I was led to organisations, and questions, I had not previously considered. What was the ALA (Australian Liberty Alliance) ? Why were people preferring One Nation to the conservative Liberal/National coalition? What is Reclaim Australia? What is the United Patriots Front? Who are the Soldiers of Odin? What is the Q Society? Why are the commentators so agitated to the point of frenzy about halal foodstuffs, the construction of mosques and the Islamic religion?

Most striking was the extent of the naked hatred of all things and people Islamic. I was enthralled and horrified as I followed individuals on Bernardi’s FB site to scores of separate FB “hate sites” set up and conducted by shadowy individuals and organisations.

All had a common modus operandi. An inflammatory article, photograph or racist meme was posted and then read and circulated, sometimes by thousands of supporters who signified their agreement with its content by either “liking” it , making a public comment themselves or “sharing” it with their FB friends. A common theme was that Islam is not a religion but an ideology and antipathetic to Western democracy, Christendom and civilisation. As such it deserved no protection under criminal or constitutional law.

Many of the anti-Islamic materials were sourced from US or European and UK organisations. I came across far-right Breitbart News for the first time and Steve Bannon who is now President Trump’s right hand man and ideologue.

A secondary object of derision and hatred were leftists, progressives (and centrists such as Prime Minister Turnbull and President Obama).

What follows are direct quotes from online FB pages made by separate individuals in Australia. I have the screenshots, which I forwarded to the national security authorities, in the hope that someone in those vast organisations were open to the dangers of terrorism from the right. All of the comments are taken over a two-week period in June 2016, so that they are sediments and sentiments from a closed period. I have not included the names of the individuals who made the remarks (but if they are real people and not made up names the police have their mark).

The plethora of continuing hate sites suggests that if anything the neo-fascists, racists and haters are emboldened by the Trump Republican rise to power in the US, the rise of white supremacists and the pending dissolution of the EC with extremists and neo fascists on the verge of power in Europe.

Of the Sudanese in Australia

“…these gutless Sudanese arseholes need to be killed or bashed and deported. NOTHING LESS…”

In relation to mosques

“Its a cult and all mosques should be burnt to the ground, and a complete ban on approvals for future mosques”

“Seriously?? WTF!!!!!! These animals should be culled”

“THEY SHOULD ALL HAVE RED HOT POOKER (sic) SHOVED UP THEIR ARSE, SICK BASTARDS”

“Send the animals and their wives back to wherever comedian (sic) or dump them in the ocean. Who cares. Just destroy the lot.”

“Our govt in Australia and most countries have allowed these human pests to continue. Kill the lot.”

“Get rid of them all. Traitors.”

“Eradication is needed, they are vermin.”

Of opposing politicians, parties, activists (in Australia, UK and USA)

“Guaranteed to be reelected and then entitled to life pension is $150,000 per year for life, shoot the imbecile”

“Fuck the greens, get the guns out”

“well there killing us. its about time we started killing them”

“I would have killed the prime minister but ahwell”

“Those who defend Islam and who do not stand up and speak out against it have blood on their hands and it’s time they suffer dearly for it.”

“Kill him. Seriously, someone just kill him.”

“friends of Q must be friends of Queers right? This is the only good thing muslims do, so let them do it !”

The above-listed threats to burn, murder and rape represent an extreme end of the spectrum of opinion against Islam and the political centre to left who are seen to be their defenders. What was surprising was how many thousands of people participated on these hate sites and how freely they expressed their prejudice, loathing and ignorance.

I followed many of the individuals to their FB home pages where they had privacy settings that enabled me to see their “friends”, their “likes”, the groups or pages they liked, photographs of their families and often their places of employment. Evil can be so suburban and banal.

My one attempt to object to offensive material was rejected by FB (I suspect by an algorithm). I have had no feedback from the police or security services as to what action, if any, has been taken to investigate the threats made online

The extreme end of the spectrum includes people who expressed support for white supremacy and mass racial cleansing. Anders Behring Breivik, the Norwegian mass murderer and white supremacist, was nominated as a hero on one FB page and quoted with approval. “We, the first militant nationalists, are the first raindrops indicating that a big storm is coming” 17.12.2012

I have debated with myself whether to include the attached “artwork” published on the FB page of a neo fascist living in Australia. Again the police have his details. 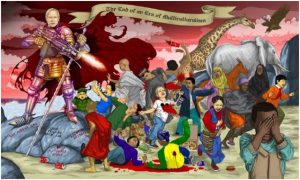 The stylized and sophisticated artwork is worthy of close study. It is sickening. A white knight is gunning down fleeing children of multiple ethnicities. The bullets are exploding through their chests, spraying and pooling blood in all directions. Shock and horror fill the children’s faces.

He spreads his poison online, unhindered.

Remember. All that I have quoted above in this article was available on public FB sites. There are private sites and invitation only groups that the neo fascists use to organise their ranks and activity. FB is merely the public outreach; the tool for recruitment, activation and radicalisation.

Do not stand by. Do not be neutral. Neo fascism, nationalism, xenophobia, misogyny, Islamophobia, anti Semitism, bigotry and homophobia are spreading like a cancer through our body politic and the western world. Social media is facilitating its growth. Extremist politicians are using it to directly communicate lies and distortions to their millions of “followers”.

The fight is on. It is not just Islam they are after. It is the very fabric of our community that they wish to tear down.

It is the fight of your life.

Our special correspondent is an Australian uninvolved with social media until physical injury laid him low and opened his mind to some forms of extremism lurking openly online. The danger, he says, is extremism…whether from the left or right, or from religious or anti-religious people: hate fuelled by the simplicity of online expression without responsibility is a dangerous, explosive mixture.