Sipping wine and debating pate, it’s easy to be cheesed off over “economic migrants”…but the reality for most refugees is vastly different and filled with fear, Louis Coutts writes.

How to lose friends over refugees

By Louis A. Coutts

The other evening, I was with a few dear friends. We were sipping rare wines from beautiful glasses and nibbling expensive cheeses and paté. All was well with the world. Gradually, I realised that the conversation had turned to the issue of what we call in Australia “The boat people”. These are people who have attempted to reach Australia from countries in turmoil in East Asia and the Middle East, seeking asylum in our country.

I also gathered that I was the odd man out and was being asked obliquely to justify the stand that the minority of Australians take about our treatment of these people. The discussion was civilised and quickly moved onto the main topic of discussion for the evening which was wine. We had some superb and rare wines and a wonderful evening which evaporated each of us departed into the late evening to our comfortable homes and wonderful lifestyle.

The immediate issue that seemed to upset my friends was the reporting by the taxpayer’s broadcaster, the ABC, together with the Fairfax press, of allegations of impropriety in the treatment of “boat people” by members of the Australian Navy. On the one hand, my friends seemed to hold the view that a taxpayer-funded media outlet had been irresponsible in reporting the event and that the source of their information were statements from the “boat people”. I took the view that any allegation of impropriety by a public institution merited investigation and if the allegations proved to be groundless, then the institution would have its name cleared.

There are small and large issues that always attract investigation when allegations of impropriety occur. For instance, in the notorious Abu Graib prison event, where it was alleged by a whistleblower that American soldiers were involved in obscene treatment of prisoners, the immediate response of the authorities was that such allegations insulted the image of the American soldier. A thorough investigation revealed the truth of the allegations and determined that a few individual American soldiers, had in fact damaged the well deserved reputation of the military.

After some reflection I decided that the ‘Navy reputation’ was not the real issue. The real issue is that boat people are terrible people and are simply illegal economic migrants who want a piece of the action of our great lifestyle here in Australia.

Some boat refugees might fall into that category and perhaps there is something to be said about them. However, the people who have sold their shirts and decided to leave the country of their birth and of their loved ones, who claim to be seeking refuge from persecution – not boat people – but asylum seekers. The fact is that such people have every right, according to international law, to be doing what they are doing.

The Australian government is a signatory to the Universal Declaration of Human Rights which recognises the rights of persons to seek asylum in other countries from persecution in their own countries. The Convention relating to the status of refugees, to which Australia is a signatory, specifies in detail the processes that must be followed by signatory countries in their treatment of refugees. The documents are silent as to how refugees might arrive at another country to seek asylum. It recognises that people fleeing from persecution are unlikely to be encouraged to make application for protection by the country they wish to leave. By way of example, the only way a person could seek refugee status from East Germany was to try to jump the wall and risk being shot.

At a point in time in our history, our government committed us to this civilised approach to the issue of people seeking refuge from persecution. Australia was enormously successful in welcoming the Vietnamese boat people who have enriched our culture of diversity. There was no possible option for Vietnamese boat people to seek asylum through official channels after we walked out of Vietnam. We left a terrible mess and deserted our Vietnamese friends who had supported us against the communists while we were in that country. They came by boats, seeking refuge according to international law and we processed them and accepted them.

The boat people today are leaving Iraq, Afghanistan, Iran and Sri Lanka which are all countries who have a horrible record of persecution of their own people. We have virtually left Afghanistan where the current corrupt government is in talks with Al Qaeda, our most deadly enemy. Sri Lanka has one of the most murderous regimes in modern time and is still persecuting Tamils in the country. We know about Iran. An Iranian acquaintance of mine says that recently the government has merely gone from terrible to bad in relation to its human rights behaviour.

The Sri Lankan regime is so bad that our allies, the US, Britain, France, Germany and Norway are trying to have a UN resolution passed to investigate the war crimes of the Sri Lankan government. It looks as though we are going to line up with Cuba, Russian and China to oppose the resolution of our allies. We have virtually given the Sri Lankan government boats to intercept asylum seekers trying to leave their country so that they can be taken back to Sri Lanka and locked up. You can imagine the treatment they are going to get when they get back home.

We have stopped the boats by virtue of the most blatant breach of international law and of our obligations under international treaties. If, as a country, we don’t like the treaties that bestow such rights on refugees, then let us pressure our government to withdraw from those treaties and become an international outlaw, keeping company with the likes of Cuba, North Korea and China. We are obliged by virtue of the International protocols our government has entered into to process applications for asylum and, where people qualify, to admit them as refugees in our country. If there are people on these boats who don’t qualify, then we are entitled to not accept them.

However, I see the issue as one beyond law. We have decided to become a global society. These people who are risking their lives, spending their life savings and fleeing from their homeland and loved ones are people just like you and me. Some of them may be crooks but most of them will be genuine people, fleeing their own country for fear of their lives. We send them back to the countries from which they are fleeing, imprison them indefinitely without processing their application and we put them on boats and send them back to Indonesia where they become stateless persons in a less than friendly country.

Our own government has said that it has declared war on these people. That is not to overlook the obscenity of the people who make money out of the trade. However, we have to remember that the only illegality in which these people would be involved is entering Australian waters without a valid visa. Up until then, they have acted in accordance with international law.

By signing international treaties, we have published to the world that we are “open for business” in helping refugees…but, when they come knocking on our door, we send them to another country and have them locked and then throw away the keys. 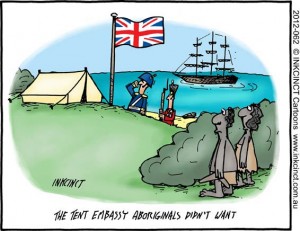 In the meantime, Turkey has accepted 750,000 refugees from Syria. It would have been easy for Turkey to close its borders but it did the opposite and set up entrance posts to assist the refugees from war-torn Syria. We have locked up a few thousand asylum seekers and steadfastly refuse to let them into our country.

I never believed that Australians would have such little compassion. Perhaps the Aborigines should have had better border protection and sent Captain Phillip packing. Then we wouldn’t have the problem.

However, as I reflected on the privileged life style I possess, I just wonder whether we can shut the world out forever. Perhaps we are a lucky country and can live in this wonderful little cocoon undisturbed by the under privileged and tormented of the world. But then again, the majority of the world’s population might just get sick of living in poverty and persecution and the mere numbers will stack up against us.