Crisis is no reason to abuse secret powers

If your MP says they are ‘tough on crime’, show them this:

From the heart of Australia, in support of Assange 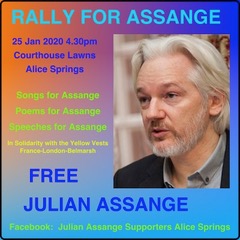 Dr Kerryn Phelps is calling for direct and urgent action to convince Senators, particularly Jacquie Lambie, to not pass a bill which would remove the medevac protective system of treatment for refugees with emergency physical or medical health problems on Nauru or Manus islands. Diana Simmons reports.